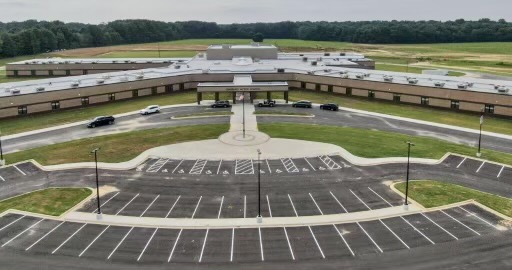 The shine is still fresh and new and will be sparkling for its students when the new Lewisburg Middle School receives its first youngsters on the first day of classes Thursday, Aug. 5.

Tuesday, teachers and staff took a moment from their preparations to celebrate with others on hand a ribbon cutting event held Tuesday, Aug. 3 on the campus, which is located on Highway 305 south of the Coldwater River. Officials point out it is past the 100-year flood plain for the river, which has had flooding issues in the past.

The new building, about 122,000 square feet in size on a 77-acre site, while separated from the other Lewisburg campuses on Craft Road, is actually situated near the center of the Lewisburg attendance zone, said DeSoto County Schools Supt. Cory Uselton.

Estimates placed the price tag for the new Lewisburg Middle School at about $21.7 million and it took 20 months to construct, according to Physical Plant Director Jerry White. The cost of the new middle school was covered through a financing mechanism called Certificates of Participation, money the district had available to pay for the project without raising taxes.

Principal Brad Meadows said his teachers and staff have been working hard in anticipation of the first day of classes on Thursday.

“The past couple of weeks has involved a team effort to get this building ready,” Meadows said. “The plant maintenance department at Central Services, our faculty and staff, our principals, it’s been everybody coming together to make sure we’re ready on Thursday.”

According to architect Allen and Hoshall’s pre-bid information, the school will house classrooms, administrative offices, a kitchen/cafeteria, library, band hall/choir rooms and a gymnasium.

About 1,000 students will be attending classes at the new school.

“We’re going to have a total of roughly 80 staff members here,” said Meadows. “The school building is pretty much built the same way as the old building. Our cafeteria is bigger, our library is bigger to accommodate our growing size. The layout is pretty much the same.”

The new school, likely the first new school building in the state’s largest public school district since Lake Cormorant High School was constructed in 2010, was first announced to be happening in August 2019, on approval from the state Department of Education.

It is also happening because of continued traffic issues around the Lewisburg cluster of campuses with the middle school population now being moved. Work is being done to add lanes for the expected school traffic entering and leaving the new campus. White said the district is in the process of having state Highway 305 widened to include a turning lane, a project that should be completed this month.

Meadows and Lewisburg Middle School have been recognized as a top-performing school in Mississippi the past four years.

“All of us are extremely excited for this day to finally be here and we are excited about this new chapter, and we can’t wait to see what this school year holds,” Meadows exclaimed.

During Thursday’s ribbon cutting ceremony, Uselton credited Meadows and his staff for their hard work.