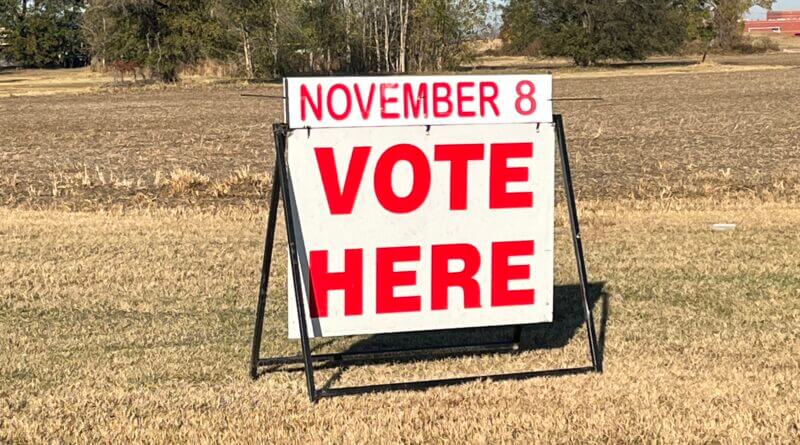 There could be a good response from voters for a midterm election when polls opens at 7 a.m. Tuesday morning in DeSoto County.

County Circuit Clerk Dale K. Thompson Monday said close to 2,000 absentee ballots had been received with 240 still not returned as of Sunday’s Absentee Ballot report to the Secretary of State’s office.

Four major races are on the ballot Tuesday. They are the race for Congress from the First District, two races for seats on the DeSoto County School Board, and an initiative decision to add a one-percent tax on restaurant sales in Hernando for park and recreation program improvements.

The races for the DeSoto County School Board are in Districts 1 and 2. In District 1, Josh Sullivan and James Eric Wright are vying for the seat being relinquished by long-time board member and former Olive Branch Mayor Milton Nichols, who is retiring from the board.  The other race in District 2 has incumbent Michelle Henley challenged by April Wright.

Hernando’s push for the local option tax approved for a vote in the state Legislature is being called “Coins for Our Kids,” but the premise is similar to other local initiatives being used elsewhere in DeSoto County.

One percent additional would be placed a gross restaurant sales within the city limits of the county seat with that money earmarked for plans to improve.

Supporters have built a website, https://www.hernandocoins4kids.com/home. Meanwhile, opponents of the tax have voiced that opposition through a Facebook page, Don’t Buy the Tax.

Sixty percent of voters who cast ballots in support must be recorded for the issue to pass.

There are other races voters will be asked to cast ballots for, but in most cases they are unopposed.

Voters can check on their registration status and see their ballot ahead of Tuesday’s vote by visiting the DeSoto County Government website on the Elections page.

Those who come to vote in person on Election Day will need to bring some form of identification with a photo, such as a vehicle license card.

Polls will open at 7 a.m. and will close at 7 p.m. Those voters waiting in line at 7 p.m. will be allowed to cast their ballots after the closing time for voting.

Rideshare apps, like Uber and Lyft, are offering 50 percent discounts nationwide for voters needing a ride to the polls on Election Day.

Note: DeSoto County News will present coverage of the vote from DeSoto County on Election Day. Look for our blog post on this website updating in real time from the DeSoto County Courthouse during the evening after the polls close at 7 p.m.