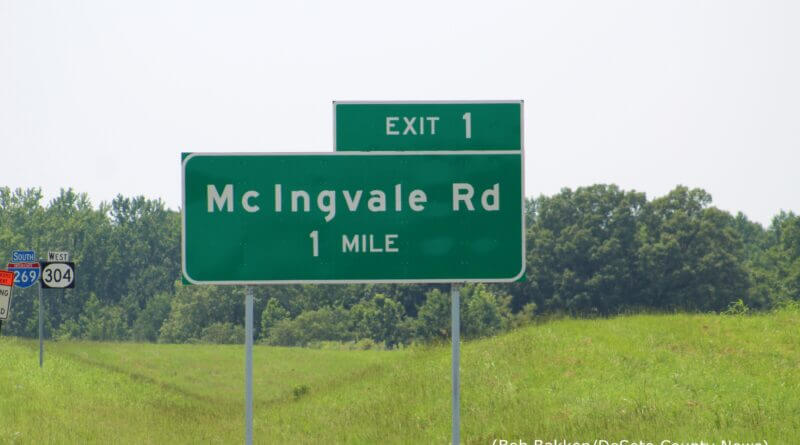 Photo: The sign alerts drivers of the McIngvale Road exit #1 on I-269 near Hernando. The long-awaited interchange will open to traffic on Friday, July 30. (Bob Bakken/DeSoto County News)

It is Exit 1 on the interstate and it will be number one in the hearts and minds of Hernando drivers, when the 15-year wait for the McIngvale Road interchange at I-269 opens to traffic Friday.

The Mississippi Department of Transportation announced the impending usage of the interchange on Thursday.

An MDOT release said the new interchange at McIngvale Road was geared towards increasing mobility and commerce in the area.

But, Hernando Mayor Chip Johnson pointed to the aging Commerce Street interchange of I-55 and said the new entrance into the DeSoto County seat should alleviate some of the traffic issues that have beset Hernando in the past.

Johnson has also said he expects business growth in the vicinity of the interchange to take place and that should benefit the city beyond the roadway access.

“It will give people a whole other route to go to in getting on the interstate, that’s going to be the key,” Johnson said. “The other thing that we’re seeing happen is that businesses want to locate there. Those big businesses that would locate there at the exit will give us a really good sales tax income and that will help keep our property taxes low.”

“This is a high-impact project that will make an immediate positive difference,” said Caldwell. “This shows that good things can happen when city, county, state and federal partners work together.”

This project was constructed concurrently with an $8.7 million Local Public Agency (LPA) project to realign McIngvale Road from north of Byhalia Road to north of Green T. It is the realignment project that allowed MDOT to move forward on the interchange.

Caldwell cautioned drivers using the interchange that there will still be workers finishing construction on the project for the next few weeks.

“This is similar to a ‘soft opening’ for a business,” Caldwell said. “The project is not complete, but it is safe to open. It is still a construction zone, so be mindful of our workers.”

Johnson expects a ribbon-cutting event will take place, once MDOT has cleared the McIngvale Road interchange as “completed.”

“There’s a whole lot of paperwork they (MDOT) have to go through before they do the ribbon cutting,” Johnson said. “When they do, I will be there, for certain.”