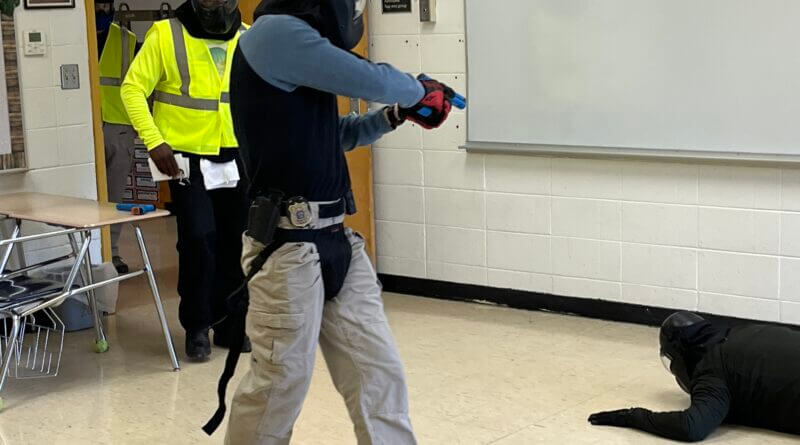 The recent spate of mass shooting incidents, most recently occurring with the tragedies at the Uvalde, Texas Ross Elementary School, has led law enforcement agencies to learn about how to respond when an active shooter seeks to cause massive amounts of deaths and killings.

The Hernando Police Department and chief Scott Worsham recently hosted a team of instructors from the Texas State University ALERRT program, the national standard for law enforcement response to active shooter events, because, as instructor Doug Herrington said, “We are going to be more efficient when we’re all taught the same way. Each department has their own SWAT teams and all that but in this event, if these officers are all working off the same sheet of music, we’re going to be more efficient to solve this problem and save as many lives as we can.”

The weeklong visit of ALERRT instructors to Hernando High School attracted departments from Mississippi, Michigan, and the Memphis metro.

ALERRT stands for Advanced Law Enforcement Rapid Response Team. During the five-day program, participants learn the program and then learn how to teach the program, said Rusty Jacks, Tyler, Tex. assistant police chief and an adjunct instructor for the program at Texas State University.

“The first two days they actually attend the class as students and then the last three days we teach them how to teach the class back to their students,” Jacks said.  “This class is an instructor-level class. We’re teaching these guys to go teach the class to their agencies.

ALERRT is taught in all 50 states and is also taught internationally.

With the high school hallway setting the scene, the officers were one afternoon shown how to approach and take down a shooter threat trapped in a classroom. Safety, coordination and teamwork are an important key. Officers were using special training weapons painted blue to differentiate them from actual weapons and they were “fake” rounds that were also pre-checked to assure that nothing lethal was involved. In fact, every participant, including this reporter viewing the action, were patted down ahead of time to make sure that no live rounds were involved in the training session.

Officers did go through the scene and then were told by the instructors what was done right and what could have been improved upon.

The ALERRT training evolves with each shooter incident, Jacks said, because the program learns from each situation.

“There’s three basic principles that we get across to these guys to teach to their students,” Jacks explained. “There’s a lot that goes into each of those principles, but it’s to stop the killing, stop the dying, and there’s rapid casualty evac(uation). Those are the three basic principles that we are trying to get across to them. Within that, there’s quite a bit of learning that’s going on in each one of them.”

Jacks estimates a 500 percent increase in departments asking the ALERRT program to come and instruct their officers about the rapid response to active shooter situations.

“Given what’s been in the news and everything there’s a need,” Jacks said.  “There’s a demand out there and a definite need for service.”

Jacks and Herrington both emphasized ALERRT is a grant-funded program through the federal government and state of Texas that pays the instructors to come out and teach the program.

“It’s the national standard so the federal government and FBI has chosen this program to back and fund,” said Herrington.

Details about the program are found on the ALERRT program website.