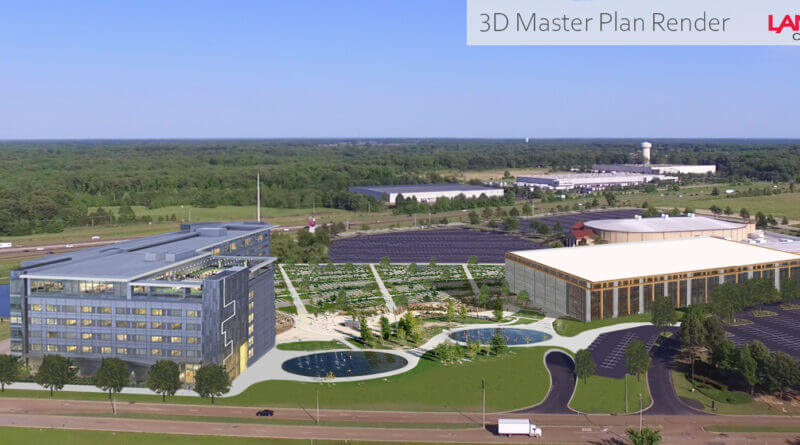 Photo: Rendering of what the expanded Landers Center will look like when completed. (AERC PLLC image)

When it was originally built, the DeSoto Civic Center was constructed as a means of holding high school graduations because of massive growth in the county. The Civic Center brought professional ice hockey and arena football to the building and has attracted a myriad of entertainment acts and events.

Today, the Landers Center, as it is now called, is the home to professional basketball and a soon-to-begin operating professional indoor soccer team, while continuing to be a major location for concerts and shows.

At the same time, the building offers convention and meeting space to hold luncheons, trade shows, and other types of meetings.

At the time, it was hoped the arena and convention center facility could grow and have an even greater impact in the Mid-South and North Mississippi.

That is about to happen with Monday’s approval by the DeSoto County Board of Supervisors of $35 million in bonding to fund a massive expansion. The unanimous vote directs bonding to fund a convention center, full-service hotel, and a free-standing restaurant on the grounds.

The hotel component is important for Southaven Mayor Darren Musselwhite, who told Supervisors the city has attracted several hotel franchises interested in locating a full-service hotel at the Landers Center.

“We have more than one hotel that we are talking with right now,” Musselwhite told supervisors. “For us to have this hotel that we’ve never had in DeSoto County before is contingent on there being a convention center.”

Musselwhite added if the hotel was not part of the Landers Center complex the city would look at other locations, but preferred it being part of the complex.

“We think this is a special, special area,” Musselwhite said. “We think the real estate location is key in the metro and from a regional perspective. The Landers Center is right in the middle of that.” Superv

The DeSoto County Convention and Visitors Bureau is the owner and operator of the facility but can’t issue bonds. The CVB will be responsible for covering the difference from the county bonding to the estimated cost of the expansion, set at about $50 million.

“The Board of Supervisors is very excited to partner with the DeSoto County Convention & Visitors Bureau and City of Southaven to bring a much-needed addition to Landers Center,” said Board President Mark Gardner. “This expansion will allow us to host large-scale conventions and trade shows, among other things, and has been a dream of ours since the start of the Landers Center project in the 1990s.”

The expansion will connect to the existing Landers Center which will now be able to host more and larger events.

The hotel addition will be the first full-service hotel in the area, complete with flexible options for meeting spaces, at least 200 spacious guest rooms, a resort-style pool and a free-standing restaurant.Construction is expected to begin in summer 2022 and take an estimated 24 months to complete. AERC, PLLC based in Hernando, Mississippi, is the architecture firm spearheading design. Once an official agreement is signed with the hotel and restaurant partners, an announcement will be made. More information is available on the Landers Center Expansion website.