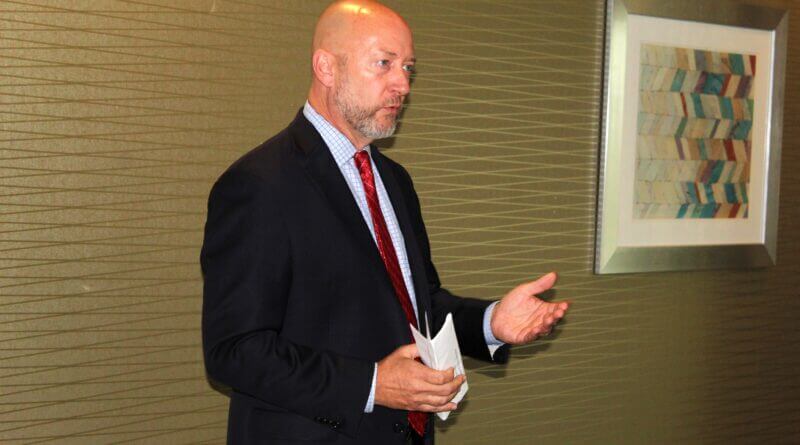 Hernando Mayor Chip Johnson has hit the ground running as the new head of the DeSoto County seat’s municipal government and touched on several items while speaking to local business leaders on Wednesday morning, July 14.

Johnson, who won election as mayor on June 8 and officially started his term in office on July 1, was the featured speaker for the Hernando Main Street Chamber of Commerce’s Grits and Government breakfast held at the city’s Hampton Inn.

While Johnson has been in the mayor’s office before, serving from 2005 until four years ago when Tom Ferguson defeated him, Hernando’s new leader said it has been an acclimation process in the first days for him and the new Board of Aldermen. The board met for the first time in a regular meeting on July 6.

“We’re all in a learning curve getting to know each other, which is important,” Johnson said. “I think the citizens elected us to work as a team on your behalf and that’s what we’re going to do.”

City officials will be attending the Mississippi Municipal League (MML) annual conference, set for July 26-28 at the Mississippi Coast Coliseum in Biloxi. Johnson said the conference will offer several opportunities to learn more about municipal government, but also will provide important contacts for future city needs.

“We’re going to meet people who are going to help our city,” Johnson said. “Those contacts have always been critical for our city. We need to know these people. All of these people can help us. I learned long ago that personal relationships are an important piece of the puzzle.”

Once they return from the MML conference, Johnson said the next important item on his agenda is setting the budget for the fiscal year starting Oct. 1, which he said is the biggest item that needs to be completed, since it charts Hernando’s course for the next year.

Johnson urged communication between residents and elected officials to help determine where priorities need to be made.

“The more people we talk to, the more information we get, the better decisions we can make,” Johnson explained. “We have lots of things that people want but the Board has to make some hard decisions and we can’t afford them all.”

Hernando expects to receive approximately $3.7 million in Coronavirus Aid, Relief and Economic Security, or CARES Act funding, Johnson said, and he is proposing the city put the money into an interest-bearing bank account, while state officials address whether to match the funds that the city would receive.

The mayor said the state match concept is being pushed at the legislative level by Lt. Gov. Delbert Hosemann. Meanwhile, Johnson wants to get together a set of priorities to plan how to spend the money, whether it’s the $3.7 million or a double amount, if the Legislature and Gov. Tate Reeves agrees to that.

“That sounds like a lot of money but when you start building water and sewer, that’s not going to go very far. Please encourage your senators and representatives to vote for a bill that is going to help us get our money doubled at the local level,” Johnson urged business leaders.

Two upper-level appointments have been made by the new administration. One is the naming of Steven Pittman as new city attorney and the other is the hiring of Pam Pyle as new city clerk.

Pittman is part of a Hernando law firm and Pyle is leaving a position as Southaven deputy city clerk to take the new position in Hernando, where she lives, starting on Monday, July 19.

The interstate exit off I-269 should become “the most valuable exit for business in the entire Memphis metro area,” he said.  The nearly $8 million project is in its final phases.

The McIngvale Extended road project should be done in October, so Hernando Hills Elementary School traffic will remain at its traditional flow until the extension is completed. At that time, traffic access to the school will flip to the new street.