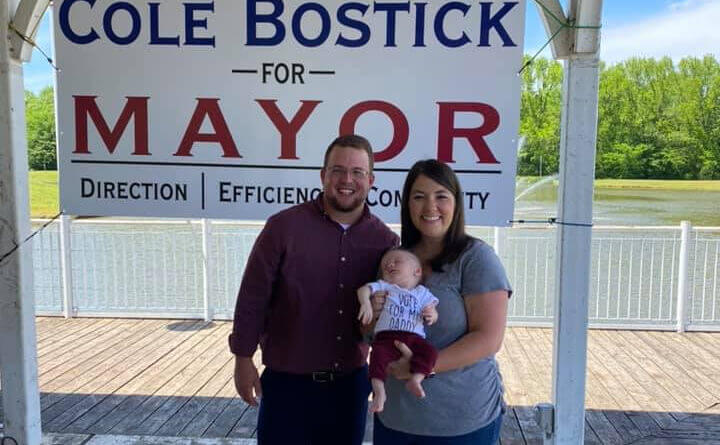 One can only imagine the conversation when the Bostick family comes together starting in July. You see, father Jackie Bostick is the current Ward 3 Alderman on the Board and is running for re-election as a Republican incumbent against Democrat Maria Morano.

Meanwhile, son Cole Bostick is also on the ballot, but Cole is seeking the Mayor’s office in a three-way race with current Republican Mayor Allen Latimer and Democratic challenger Jimmy Stokes II.

They are among 15 candidates running for posts on the Board of Aldermen and for the city’s top position as its Mayor.  More than 30 people ran for office in the April primary.

“I remember being maybe five years old and cleaning up Wooten Park, walking through and picking up cigarette butts in Wooten Park and thinking, ‘this park deserves better,’” Bostick said. “I never really understood my draw to this area until I got into the classroom and began to see that the community members here built me and molded me in a way that there is nothing off the table. No goal was too big. Obstacles, you overcame them. Struggles, you overcame them.”

“I co-led the Mayor’s Youth Council for a number of years, actually almost a decade and I’ve also gotten to work in the Planning Department, the Utilities Department and be a part of special projects in those departments,” Bostick explained.

It’s possible after July 1 that Cole Bostick could take a seat at the table leading a Board of Aldermen meeting, glance to his right and find his father at his place at the table. If that happens, Cole is certain his alderman father will be treated no differently than the others sitting on the board.

“At meetings he is Alderman Bostick and at meetings he’s one of seven votes,” said Cole. “If there’s anything to be voted on that would affect my personal life, he would probably vote ‘absent’ just so that nothing ever comes across as he is trying to do any favors or anything of that nature for me.”

One reason Bostick has decided to put his political hat in the ring for the first time is that he sees his hometown as not living up to its potential. He’d like to change that, if elected.

“The city needs day-to-day leadership that has high expectations that builds the quality-of-life in the people,” Bostick said. “I think we, as a city, have settled into a more reactive approach instead of a proactive approach. I also think there is a lack of productive direction and a lack of planning of what is happening. There are great things that are happening here but are they thought out? Are they followed through on, and are they making life better for everybody here?”

By running as an independent, Bostick avoided participating in the April primary election because primaries are actually functions of the major parties, Republican and Democratic.

“Being independent on a local level is nothing more than being the leader that people want,” Bostick explains. “On a local level, what is political, what has to be political? I hope that on June 8 community members will get to know the person over the party.”

Bostick’s work as an educator and living in Horn Lake much of his life, he feels, plays to a strength that he has for the office.

“We need direction from someone who’s connected to the current community that seeks the day-in, day-out, what is truly going on here,” said Bostick. “As a teacher and educator in this community and working with hundreds of students over the years, I’m connected with their world and that shows me where the community is headed and what’s truly going on here.”

Bostick also said he would review each department and implement changes where he thinks it is needed.

There are not many cities the size of Horn Lake where two members of the same family sit at the table of the city’s governing body.  That might happen starting July 1, but regardless, conversations about the well-being of the city will likely continue at the Bostick family table because of how the family views and cares about their hometown.

You can find out more about his candidacy on his Cole Bostick for Mayor Facebook page.