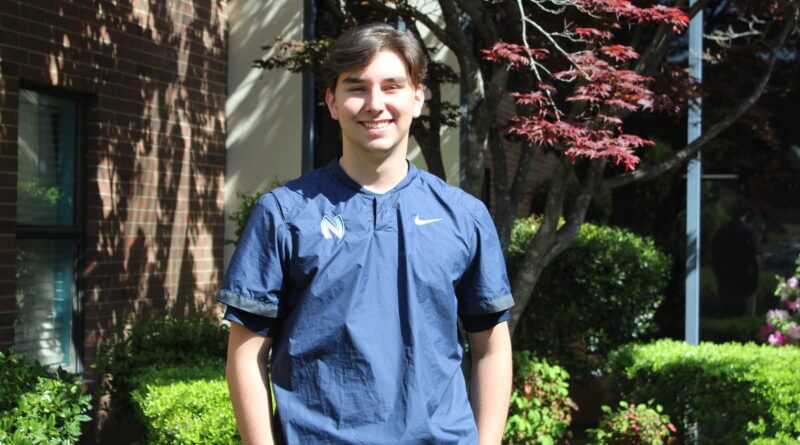 After wearing the Northpoint colors and school uniform through his years in school, Flores will don a graduation gown on Saturday morning and receive his diploma. However, that is not the end of the uniform wearing for Flores, who toward the end of June arrives in the U.S. Naval Academy in Annapolis, Maryland. It is there he will don a new uniform and start his plebe year as a freshman at one of the nation’s service academies.

Flores is the first Northpoint/SBEC graduate to receive an appointment since 2008. His journey to the appointment was a long, arduous one that was nearly scuttled by an injury.

The journey actually started in 2019 when the Naval Academy played Memphis in the AutoZone Liberty Bowl. when Flores was watching the midshipmen enter the stadium without flinching through the cold and rainy late December weather.

“I am going into Naval Aviation and I originally was hooked on going to Texas A and M,” Flores said. “During the Liberty Bowl I talked to an admissions counselor when Navy was here to play Memphis. It then clicked in my head that I’m going there.”

To be admitted to a service academy requires a nomination and appointment from a U.S. Senator or Congressman. Another, but extremely difficult avenue is through a Vice Presidential nomination, a process that is incredibly competitive. A parent who was active duty or retired makes a prospective midshipman eligible to receive a Presidential nomination.

In June of last year, Flores began his required online summer seminar and began the application process in August 2021.  The process was moving along until a football practice day at school put his dreams of the Naval Academy in jeopardy.  A tackling drill had Flores up against a teammate and what happened would threaten to kill his dream.

“I got up, took the ball, and he tackled me, a routine tackle, nothing special about it,” Flores said. “But we both landed on my shoulder and it broke my collarbone right in half. My senior season got taken away from me. I was two weeks out from my fitness assessment when I broke my collarbone and I was in the best physical condition of my life.”

The process continued as Flores recovered and was cleared for athletic activity seven weeks after the surgery, nearly half of the originally estimated time.

The senior then continued the process, going through interviews, and in mid-December learned he had been nominated by U.S. Senators Roger Wicker and Cindy Hyde-Smith, along with U.S. Rep. Trent Kelly.

Flores passed his Candidate Fitness Assessment, which had been delayed by his football injury, and was interviewed by his Blue and Gold Officer, or BGO. The BGO is a volunteer who questions applicants to learn more about their background and reasons for applying to the Naval Academy.

The football injury continued to cloud the process for Flores, however, as he got a medical disqualification in February and March. He did receive a letter of assurance on March 10 but more information about his health was needed from a doctor. An April appointment to get the clearance letter was set.

Following the medical appointment, Flores’ Academy appointment came under medical review for nearly two weeks. It was on April 19 the senior received his medical waiver and two days later he learned of his appointment to the Naval Academy from Sen. Wicker and from the office Sen. Hyde-Smith. Congressman Kelly has also given Flores an appointment.

Now ahead for Flores is his freshman, or plebe year at the Naval Academy, which he says does not compare to anything else ever experienced.

“They break you down to the very, very last straw and then they build you back up beyond what you thought was even possible for a human to achieve,” Flores said. “They do it all through camaraderie with your shipmates. If you did the plebe year alone, I don’t think you would make it.”

Flores said he plans to study aerospace engineering at the Naval Academy and he’ll bring a 4.65 grade-point-average from Northpoint to Annapolis. He plans to make the Navy a career, even after his required five-year post-graduation service is finished.

“Most don’t just go to the Naval Academy, do all of that, and then not make a career out of it,” Flores said.

The journey now continues for Flores, who Saturday trades in his Northpoint Christian School uniform for a Naval Academy uniform and a commitment to serve his country while he lives the dream he desires to achieve.