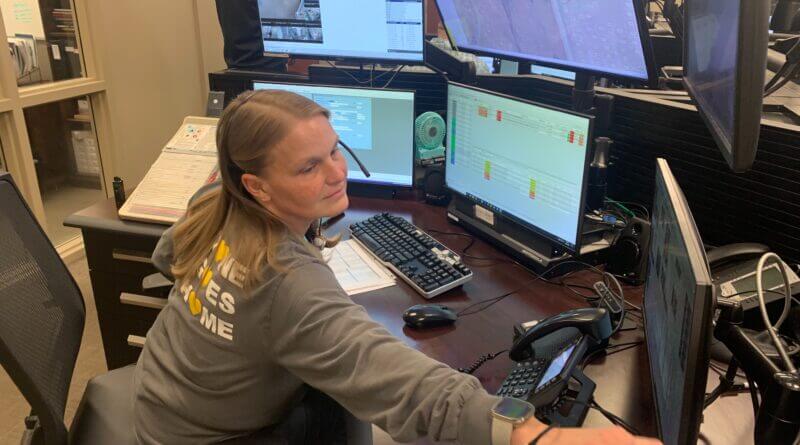 With those words, found on her Emergency Medical Dispatch card, a DeSoto County Sheriff’s Department dispatcher reminded a man about to become a father the baby his wife was delivering into his arms might be slick when the baby entered the world.

Those were the words Heather Holden uttered as she helped deliver a baby back in November that she got to meet recently when mom, and baby boy surprised her at department headquarters in Hernando.

Dispatchers have a lot of duties when they’re on a shift. They are calling deputies to respond to those needing help or responding to criminal activity, or sending paramedics to emergency medical calls, many times all at the same time.

It’s an important job that can bring with it a lot of stress and a lot of pressure to be accurate, clear, concise, quick, but also compassionate when situations like what happened in November occur.

Holden said the birth was the first time she had actually delivered a baby, with her doing the directing over the phone for the father, Blake Nevill, putting her words into action.

“I’ve had pregnancy calls before where they called and said they were having contractions, were pregnant, and all that, but never once had I had to deliver the baby over the phone,” Holden said. “When he called, his first words were, ‘My wife’s in labor and the water’s broke.’ I knew then the baby was coming.”

Dispatching in a law enforcement center doesn’t seem like a gig a teenage girl would want to get into, but it was Holden’s first job while in high school. It’s also the one she’s continued to do ever since, now at more than 20 years.

“I started when I was age 15 and I started part time and went full time when I graduated,” Holden said. “It’s not the same every day job, you never know what you are going to get.”

It is also not a job that is simply opening up a microphone and talking followed by pushing a few computer keys. Holden has to have gone through training and certification to take her spot in front of the screen.

“We have to be CPR-certified and we have to have Emergency Medical Dispatch,” Holden said, meaning she has cards, scripts and procedures for about every situation that can come up and that all dispatchers are required to follow.

Holden said there were other procedures she had to do while the baby was being welcomed into the world.

“At the same time I was talking to him (father), I was logging the paramedics responding,” Holden said. “When the baby actually had come out I had to log what time he was born and I had to keep up with his birth time.”

Holden got to meet baby boy Mason recently with a surprise visit by mom Becca Nevill and his two older siblings, three-year-old Carter and one-year-old Riley to the Sheriff’s Department.

“It was good,” she related. “I was completely shocked and they pulled a really good one on me. I really didn’t know.”

Dispatchers take a multitude of calls each day, but the November night with the Nevill family will rank among Holden’s most memorable.

“It was very exciting,” Holden said. “It was probably one of the best calls that I’ve ever had.”