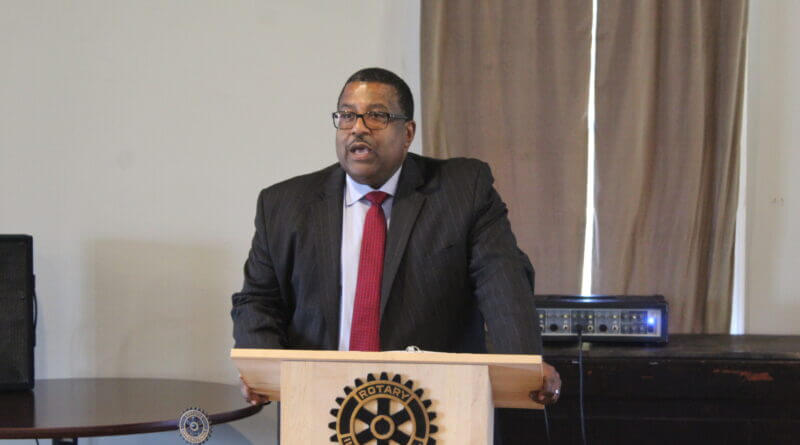 Olive Branch Police Chief Don Gammage recently reviewed some of the city’s statistics for criminal activity and the department’s response at a Rotary Club of Olive Branch luncheon meeting, showing lower numbers and strong response in newly annexed areas of the city.

One of the areas that was of concern when a judicial ruling allowed the annexation of 18.5 square miles of unincorporated DeSoto County was how the Olive Branch Police Department would be able to cover the new areas of the city.

His figures showed over 500 traffic citations and warning citations since late May in the annexed areas.

Another statistic in Gammage’s presentation indicated a reduction of 3.7 percent in overall crime through mid-November. Three homicides have taken place in the city to this point in 2021, but all three happened in one instance, on New Year’s Day when two men and a woman were found dead at a residence. A Cordova, Tennessee man was later arrested and charged in the case.

Gammage pointed out there were two homicides in the city during the entire year of 2020 and three in 2019.

The Olive Branch Police Department has been very intentional about its outreach to the community and uses social media as a tool of communicating with the public.

In his talk with the Rotary Club, Gammage pointed out some of the outreach programs the department does during the year. That includes the annual Shop With A Cop, which this year will take place Dec. 17 at the Walmart Supercenter. Between 30-40 youngsters, predetermined due to their situation, will be able to shop with a police officer for Christmas toys and other items.

The police chief expressed his gratitude to the city and local government for its support of his department.

“I’ve been truly blessed these 13 years as chief to get the resources we need,” Gammage said. “I’ve worked for four mayors and several board (of Aldermen) members and they’ve always been pro-law enforcement.”

He noted that it is hard for people to get into law enforcement anymore and that the number one job now becomes recruitment and retention. One of the attractions to working in Olive Branch comes in compensation.

“The Mayor and Board of Aldermen has made Olive Branch officers the highest paid in the state,” Gammage pointed out. “They had to do that to attract officers,” adding that at one time OBPD was 21 officers short of a full roster. The department is just two short of a rull group.