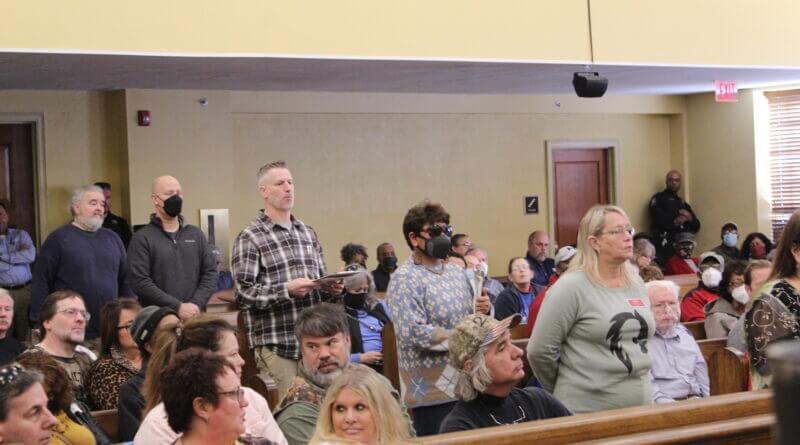 It was a lengthy day of listening and explanation for the DeSoto County Board of Supervisors, who sat through hours of comment about a proposed zoning ordinance that has caused many ripples across the county about its ramifications, if approved.

A public hearing on a proposal that included changing Agricultural-Residential (AR) zoning to Residential Estate (RE) zoning began at 1 p.m. Tuesday, but was recessed shortly after starting and moved to the nearby DeSoto County Courthouse, due to the mass of residents on hand to testify and hear about the plan.

At the end, the consensus was the plan needed a bit more than “tweaking,” as was mentioned at one point in the afternoon session, and the proposal was tabled for more study.

“We want to thank everyone who came to the hearings today,” said Board President Michael Lee. “We hold these hearings so we can hear directly from citizens. After listening to everyone’s concerns and comments, it is clear more work needs to be done on the Proposed Zoning Ordinance.”

Basically, the proposal from County Planning Director Bennie Hopkins included a move to rename and rezone properties under 10 acres as RE zones. Properties over 10 acres would become Agricultural zones. But that is one part of the proposal.

Hopkins said the current zoning ordinances have not been updated in about 30 years and the growth of DeSoto County necessitates some changes.

But residents, including David Miller, who presented a petition in opposition to the zoning ordinance changes, said the AR zoning was done to protect those who want to live in a rural setting away from the growing “urban sprawl.”

“It seems to me the framers of the current zoning ordinance wanted to protect agricultural land users from urbanization,” Miller said. “I feel it’s important to point out that the AR district hasn’t grown into the urbanized areas. Urbanized areas have grown into agricultural areas.”

Hopkins felt the zoning change to RE would address that because of the growth of new homes in DeSoto County.

“On the residential side of new construction, the county has outpaced the cities,” Hopkins said. To back his statement, Hopkins showed annual statistics with the county having issued 708 new permits, compared to 545 in Southaven, 276 in Hernando, and 240 in Olive Branch.

Estimates of about 200 people gathered and filled the normally adequate board room at the County Administration Building Tuesday afternoon. However, many more filled the hallway trying to hear what was being said until it was learned the large courtroom at the Courthouse was available for use.

When reconvened at the courthouse, and after a presentation on the zoning change and the reasons behind it by Hopkins, a lengthy line of residents wishing to speak on the changes formed to address county officials.

Among the changes under the proposal are an update and change in some definitions, allowing fences on corner lots in certain circumstances, strengthening adult entertainment use language, and adding language concerning short-term rentals.

“The AR and A (Agricultural) districts are closely related as they are written now,” Hopkins told DeSoto County News. “Working with the Central Mississippi Planning and Development District, they recommended that we look at possibly finding a zoning district designation that would sort of separate the A and the AR.”

According to information released by the county after Tuesday night’s meetings, Supervisors and the Planning Department will review all of the comments and make updates and changes where needed. Once the document is updated, it will be released for citizens to review, and a new public hearing will be scheduled and publicized.

RECORD ECONOMIC GROWTH: In the morning session of the Board of Supervisors meeting on Tuesday, DeSoto County Economic Development Council President/CEO Jim Flanagan presented its annual report, which showed record numbers for industrial growth in the county.

Highlights were the relocation of the Edelbrock corporate headquarters and manufacturing operations to Olive Branch and the expansion of Voyant’s operations in Olive Branch, choosing to stay in DeSoto County over moving the operations elsewhere.