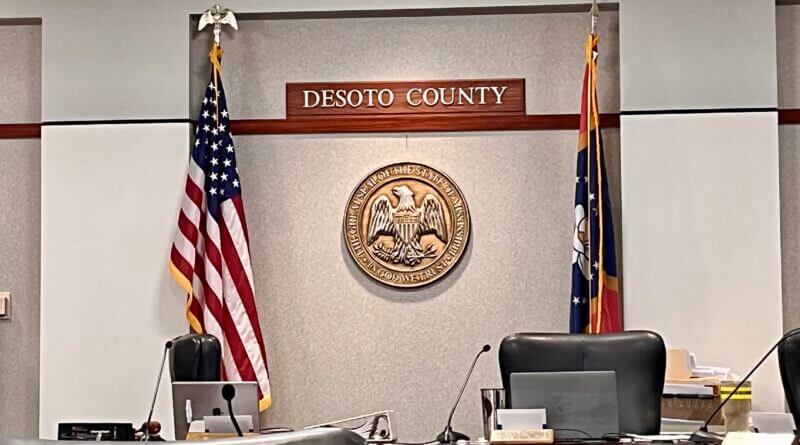 Supervisors to meet next Monday on medical cannabis law

If you pay for taxes through DeSoto County Tax Collector Joey Treadway’s office with a credit card, there may be an additional charge included on that payment in the future.

Businesses who allow consumers to pay with credit cards many times are charged processing fees per transaction for the convenience. That is why in some places you must make a minimum charge amount to pay with a card.

At Monday’s DeSoto County Board of Supervisors meeting, Treadway informed the board that a contract with BancorpSouth where processing fees were not charged for credit card payments was coming to an end. Treadway said it’s been over 30 years for residents to make credit card payments through his office with no extra fees being charged.

Now, the county may be facing processing fees that could be as much as 2.5 percent of the total charge, an amount the taxpayer would likely have to be assessed in addition to the actual amount of the payment.

Treadway said he is looking at other options, one of which is a firm called Graphite Payments of Detroit, Michigan that serves businesses of every industry, governments and municipalities.

Nothing has been decided yet, Treadway said, but he wanted to make supervisors aware of what is to come.  The public will be alerted when a new program begins and what it would mean in their tax payments to the county.

Another area Treadway is looking at is the possible installation of kiosks at his offices for tax payments. It’s a system that is working well in Lee County, Treadway told supervisors, and would help ease the work demand of an already short staff.

Also Monday morning, supervisors quickly recessed a planned discussion on the new medical marijuana state law and its effects in the county. They decided to return on Monday, April 25 at 8 a.m. in Hernando with the new state law as the focus of that meeting.

As DeSoto County cities have been debating whether to opt-out of the law ahead of a May 2 deadline, counties also have that deadline facing them if they want to do the same.

County officials have said very little thus far about if they would opt out since the new law allowing cannabis use for medicinal purposes was passed and signed by Gov. Tate Reeves in early February.

The concerns of municipalities that have opted out of the law is in the lack of zoning control for dispensaries or other facilities that would deal in medical cannabis.

Horn Lake cited zoning concerns as it opted out of the law earlier this month, and the three other cities in DeSoto County, Hernando, Southaven, and Olive Branch, are likely to make some decisions at their next meeting on Tuesday, April 19.

That’s because it would be their last regularly scheduled meeting before the May 2 deadline.

Cities that opt out of the law have the ability to opt back in at any time, but those who stay in on May 2 can’t do the reverse and opt out after that time.

County officials, expecting a large turnout, asked that anyone who wants to address supervisors at the meeting to let them know ahead of time. Right now, the meeting is to be held in the County Administration Building board room on Monday, April 25 at 8 a.m., but a large demand may require another location.

Any state adjustments to the medical marijuana law likely won’t happen until legislators return to Jackson next January.

Supervisors also recognized Organ Transplant Awareness with a presentation made by Sharon Wofford and Bridgette Bulloch of the Mississippi Roses chapter of Links, Inc.

April 22 is Blue and Green Day, an awareness effort to promote organ, eye, and tissue donation.  April has been designated as National Donate Life Month.