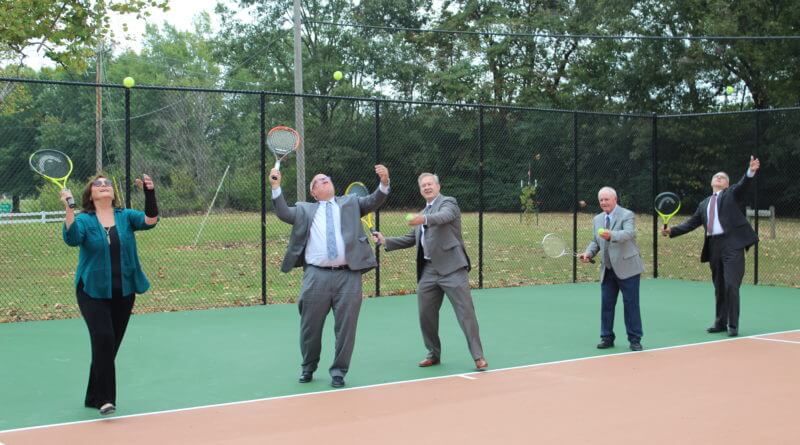 The DeSoto County Board of Supervisors took a break from a lengthy day of meetings on Monday to hold a ribbon cutting at the new Eudora Play Court.

The area, primarily a tennis court that will eventually have a hopscotch area and bench space, is a $50,000 investment in the county’s growing parks and recreation opportunities.  The county recently opened a new Johnson Creek Greenway near Lake Cormorant.

The Play Court area, which originally was the site of the old Eudora School building torn down more than 20 years, was donated by the Dean family to the county. There has been a pavilion, restroom facilities, walking trails, and a softball diamond already added as part of the Eudora Community Park on West Commerce Street.

Supervisor Lee Caldwell said there has been talk for many years of adding a tennis court to the area.

“My predecessor, Alan Latimer, had talked about this area being a tennis court,” Caldwell said. “This used to be Eudora School and there was an old gym here, They tore the gym down and they promised the people of the area that we would do something with that one day.”

According to Supervisor Mark Gardner, who is an avid tennis player, there is a demand for more tennis facilities in DeSoto County. There are courts already available in the cities, but demand for court time means waiting for a court to open up.

This is the first court in the unincorporated area of the county.

“We have between 1,500-2,000 USTA league players in DeSoto County,” Gardner said. “We’ve got about 300 junior league players, so tennis is growing.  This is an investment in our future and we’d like to see a lot more community courts.”

Gardner added he plays with others who are in their 70s and 80s who “still got game,” stressing tennis is a sport for all ages.

Supervisor Michael Lee looks at facilities like the Play Court as an investment in the county’s quality of life.

“When you put all of these things on our resume of what we have to offer, now you can add eight parks to the resume and one greenway,” Lee said. “We look at these projects as a board and we look at them with the people in mind.”

Access to the Play Court is on a first-come, first-served basis.