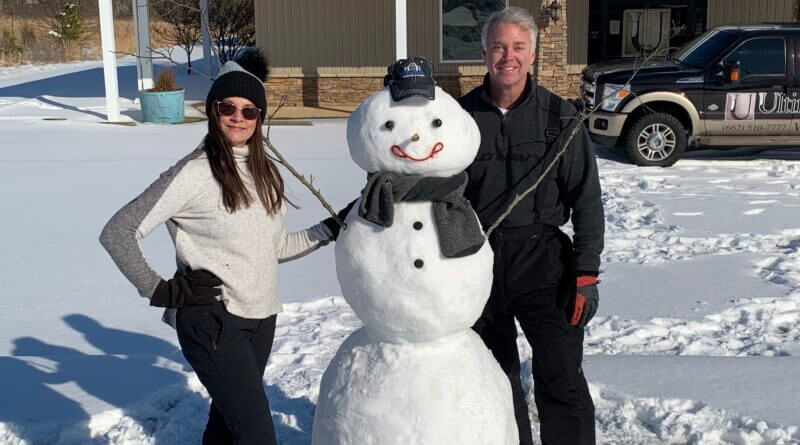 People in DeSoto County this week have had the opportunity to do wintertime things that don’t happen here very often at all.

With an average of three inches of snow for an entire year, the week’s snowfall of, in some areas close to 10 inches, provides a rare chance to sled or slide down hills, get into snowball fights, make snow angels, or the classic one: build a snowman.

There have been several snowmen, snow women, and snow kids that have popped up around DeSoto County this week. They’ve all varied in shapes, sizes, and are bedecked in hats, scarves, gloves, and other apparel.

When Paul Ollar, the owner of Ultimate Windows and Mid-South Roofing was faced with some down time because of the winter storm, he decided it was time to get creative and make what he called the “Ultimate Snowman.” The name’s appropriate because, after all, it is in front of Ultimate Windows.

You can see it in front of Ollar’s business on Airways Blvd., south of Stateline Road.

“It’s been a long time since we’ve had this much snow and I just wanted to do something here at my property and businesses that folks can see many days after the snow melts,” Ollar said.

With the help of Cassie Kattawar, the pair Friday afternoon set about building a snow figure that’s about as tall as Ollar is at nearly six feet.

Ollar said he cannot recall another time in over four decades that he’s been able to fashion a snowman like what he has now in front of his store.

“I’ve lived in DeSoto County since I was five, 41 years ago, and I remember when I was 11 or 12 years old and we had snow like this, but it hasn’t been since then,” Ollar said.

You may want to hurry if you want to view what Ollar and Kattawar made, however, because weekend weather forecasts have highs Saturday forecast around 40 degrees and topping the 50-degree mark on Sunday, as Ollar’s snowman joins Frosty in singing, “don’t you cry, I’ll be back again some day.’”