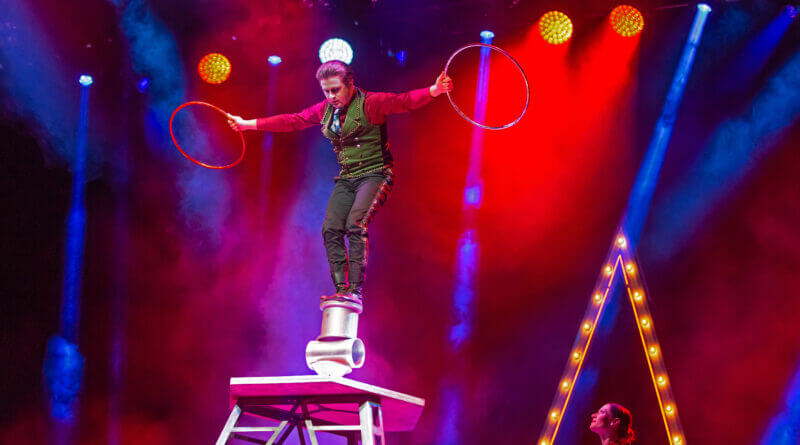 This November, MagicSpace Entertainment launches the national tour of “A Magical Cirque Christmas,” a comedic, musical, and magic-filled holiday experience that makes a perfect date night, fun family adventure, and group outing.  The tour will play Landers Center in Southaven on Wednesday, Nov. 16. Tickets go on sale this Friday, Aug, 26 at 10:00 a.m. at ticketmaster.com. World-acclaimed performers and cirque artists take audiences back in time, immersing them in the spirit of the season and performing Christmas classics through the decades. The show will criss-cross the U.S. playing cities such as Los Angeles, Chicago, Washington D.C., and Nashville.

The Christmas tale begins as the Guardian of Time, who manages the changing of the seasons with his giant magical clock, finds himself less than thrilled to face the countdown to the 2022 holidays. In other words, he’s not feeling it. An optimistic, magical Christmas fairy played by the glamourous and comedic magician Lucy Darling whom David Copperfield calls “a true original – hilarious and delightful; An exceptional new talent in magic” and the Chicago Tribune calls her “immensely entertaining” appears to help but despite her best intentions, causes time to go haywire when she breaks the clock.

The story jumps along the time spectrum with visits to the rollicking 1920s a la The Great Gatsby style, the rockabilly 1950s, the boogie-oogie 1970s, and a classic Victorian 1890s London reminiscent of Charles Dickens, and is accompanied by beautiful holiday music from each period. To keep the clock ticking, Lucy Darling uses all her skills with jaw-dropping tricks and amazing feats of illusion, including a levitation that requires a bit of audience participation.

“A Magical Cirque Christmas is a great opportunity to bring friends and family together to reconnect, share laughs, and create new memories during the holiday season. We’ve assembled top-tier talent for an incredible evening of surprises that we think will bring a ton of joy during a cherished time of year,” said Director Louanne Madorma, who has directed cirque shows all around the world.