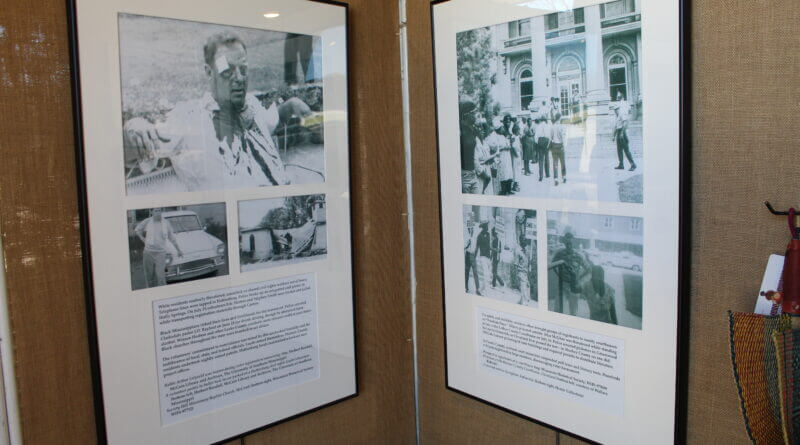 Photo: Stand Up! Freedom Summer of ’64 photography exhibit is available for viewing through March 6 at the DeSoto Arts Council building in Hernando. A companion exhibit, Murder in Neshoba, is on display at the DeSoto County Museum. (Bob Bakken/DeSoto County News)

Mississippi is a place wafting in immense pride, culture, art, and history. Some of that history rightfully swells pride among the people of the South. Parts of the past have not been pleasurable, however, resulting in deep divisions among the people and races who reside here. The healing from the painful moments of the state’s past is happening and continues, but reminders remain and, as poet and novelist George Santayana is credited with saying, “Those who cannot remember the past are condemned to repeat it.”

It is the need to remember and learn from the past that has brought the artistic and historical communities of DeSoto County together for a special exhibit and a panel discussion on one of those painful, historical moments.

On display now through March 6 at the DeSoto Arts Council in Hernando is a photographic exhibit called, “Stand Up! Freedom Summer of ’64.” The series of photography exhibits is on loan from the Mississippi Museum of Archives and History.

A companion photographic exhibit titled, “Murder in Neshoba,” is on display at the same time in the DeSoto County Museum in Hernando.

As part of a partnership between the Arts Council and Museum is a panel discussion set for 6 p.m. Thursday, Feb. 25, at 6 p.m. in the old Presbyterian Church located next to the museum on Commerce Street in Hernando.

The discussion will focus on the 1964 event called, “Murder in Neshoba,” the shooting deaths of three voting rights activists outside Philadelphia, Mississippi in June of that year. The event where the three were arrested for speeding, then released and followed out of town, taken to another location and then shot to death at close range, sparked national and international outrage. Their bodies were found two months later under an earthen dam.

Seven were eventually convicted but received relatively minor sentences for their part in the killings, which reportedly included members of the county sheriff’s office, Philadelphia Police Department, and the Ku Klux Klan.  One man, Edgar Killen, was convicted of three counts of manslaughter in 2005 and sentenced to 60 years in prison. He died in prison three years ago.  The case is now officially closed.

The three panelists featured at the Thursday program will include two men who lived in Philadelphia, Mississippi during the violent summer of 1964 and a DeSoto County native and resident who was a trailblazer in voter registration for African-Americans, said museum curator Robert Long.

“James E. Prince III is the owner of Prince Media and is also an award-winning journalist and a native of Philadelphia, Mississippi,” Long said. “He and Leroy Clemons, an African-American civil rights activist, will speak about the Murder in Neshoba County from the standpoint of them being from that area. Dr. Leslie Burl-McLemore is a Walls alderman and was a long-time history professor and political science professor at Jackson State University. He is the first modern African-American individual to register to vote. It did not occur for him until the 1960s as a young man, and he did not encounter any resistance.”

Helping to serve as moderator for the program is Jacqueline Dutsch, DeSoto Arts Council Executive Director. Dutsch said the program and exhibit are part of the council’s annual effort to intertwine the arts with history, especially if it touches on DeSoto County.

“Every year, we make a conscious effort to locate exhibits that reflect both the history and the culture of the community around us as well as the artistic quality and the art that comes along with that,” Dutsch said. “We did Freedom Ride last year and we’ve done the Blues in Black and White, and different components to bring the arts and history cultures together.”

Long notes the Civil War and Murder in Neshoba are two events that have shaped opinions of the Magnolia State over the years. He hopes the discussion will expose the atmosphere of Mississippi during the Freedom Summer of 1964 and how the state has progressed since then.

Dutsch points to recent events, such as the death of George Floyd in Minneapolis, as a reason to look back at the past through the Stand Up! exhibit.

“We found this photography exhibit and this is a really good exhibit to reflect, especially with everything that has been going on the past year,” Dutsch said. “Looking at this photography, looking at the history and bringing the two together,” adding the size of the exhibit made it impossible to house in one location, hence the shared space between the museum and Arts Council.

Long stressed Mississippi has started to move away from resistance to change and has become more inclusive, citing one particular statistic.

“This state has more black elected officials than any other state in the nation, including California and New York,” Long noted. “Mississippi has made great strides toward racial equality.”

Long added that, while a dark and painful part of the past, the tragedy that was the summer of ’64 in Mississippi should be remembered to prevent it from taking place again.

“In 2021, we can’t right all of the wrongs of the past,” Long said. “People say, ‘why bring up unpleasant things?’, but I do firmly believe there is an inherent need in the human condition to atone as best as we are able to for the sins of the past, and then to move on.”

The panel discussion, “Murder in Neshoba,” is free and open to the public. It will start at 6 p.m. on Thursday, Feb. 25, in the old Presbyterian Church adjacent to the DeSoto County Museum. The photography exhibits, “Murder in Neshoba” and “Stand Up! Freedom Summer of ’64” are also free of charge to view during open hours at the museum, 111 East Commerce Street, and the DeSoto Arts Council, 2465 Highway 51 South, both in Hernando. They are both on view through March 6.