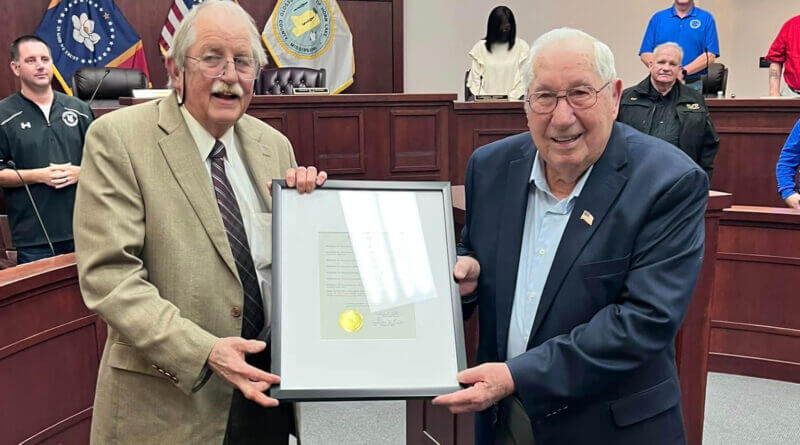 Tuesday was declared Olin Pickens Day in the City of Horn Lake. Mayor Allen Latimer presented Pickens, a World War II veteran who celebrated his 101st birthday on Dec. 31, with a proclamation during Tuesday evening’s Board of Aldermen meeting.

Pickens’ story in World War II is especially noteworthy because of his being captured and held for more than two years by Nazi soldiers as a prisoner of war.  He entered the Army in 1942 and was discharged in 1945.

In reading the proclamation, Latimer said, “Mr. Pickens never wavered in his faith while being held a prisoner of war. The city and we all owe him an unpayable debt for his service.”

In other action at a short meeting Tuesday, Latimer thanked city employees who worked through the recent ice storm providing services during the Christmas holiday.

Bahr also alerted aldermen that the January planning agenda will be lengthy, as it will have nine items to be considered.

The Horn Lake Board of Aldermen meeting can be viewed on the city’s YouTube channel.