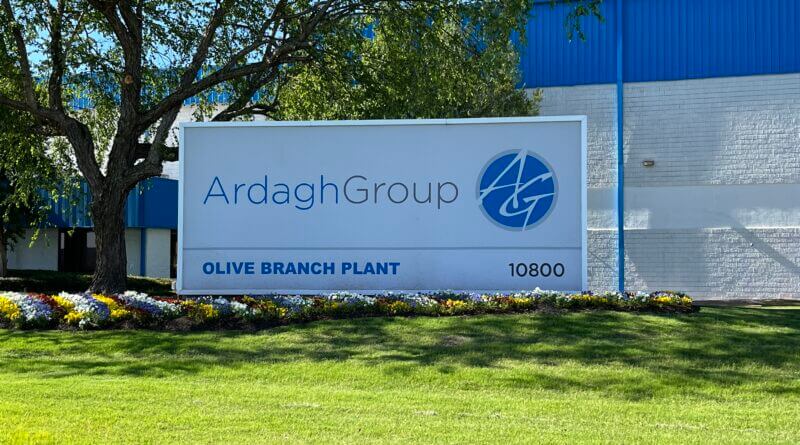 Mississippi Gov. Tate Reeves made a stop in DeSoto County Monday and visited the Ardagh Metal Packaging 490,965-square-foot facility in Olive Branch. Reeves’ appearance was to discuss economic development growth in DeSoto and Marshall County in particular. He also answered media questions on a variety of issues after a tour of the plant, located off Hacks Cross Road.

Ardagh Metal Packaging is a global leading supplier of sustainable, recyclable, metal beverage cans to brand owners, such as Coca Cola. The company operates 24 production facilities, employing more than 5,800 people. Almost 250 are employed at the Olive Branch location. The company recorded revenues of about $4 billion in 2021.

Reeves pointed to Ardagh as one company that has brought millions of dollars in investment to North Mississippi in the time he has been governor.

“Investments like this have totaled almost $700 million in new capital in DeSoto and Marshall counties alone,” Reeves said. “Hundreds and hundreds of new jobs have been created in these counties alone. Our economy is on fire and the reality is that, in the old days we used to have a lot of people looking for jobs. Now, we’ve got a lot of jobs looking for people. We need more people in Mississippi.”

Between 2012-2019, Mississippi lost population every year for eight consecutive years, but a small gain in population was seen in 2020. There’s been a net uptick over the past couple of years, Reeves said, although 2021 saw a slight decrease again.

“Jobs are important,” the governor said. “Quality of life matters as well. We need to convince people to come here once. When people come here they tend to like what they see.”

The governor said the income tax cut passed by the state Legislature this session can help make north Mississippi more competitive in attracting business here, instead of other states, like neighboring Tennessee.

“My ultimate goal is to eliminate the state income tax in Mississippi so we are on a level playing field with Texas, Florida, and of course, Tennessee,” Reeves said. “We’re making progress on that and we will continue to make progress on that.”

He added the state hopes to attract Nissan’s expected third U.S. vehicle plant, one that would concentrate on making electric vehicles. Nissan also has a vehicle plant in Tennessee. The two states would be competing for the facility and the jobs that would be created.

“We just announced that Nissan is investing $600 million in their Canton facility for their first two electric vehicles,” Reeves said. “We have a great working relationship with Nissan, employing over 5,000 in their Canton facility. The companies we have the best luck with are those who are already here because they know about our workforce.”

More information on Ardagh Metal Packaging may be found on their website.