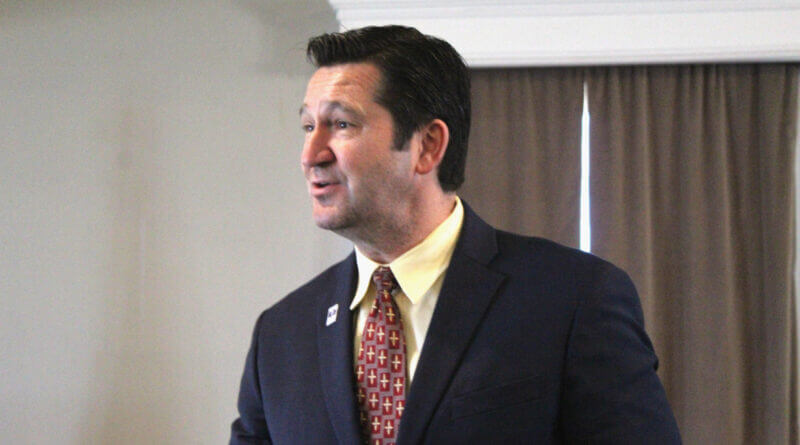 He calls himself the “chief servant” of the seminary that helps prepare the next generation of pastors, ministers, chaplains, and other spiritual leaders of the church. The Rev. Dr. Jody Hill, president of Memphis Theological Seminary (MTS) described the school’s mission during a recent meeting of the Rotary Club of Olive Branch.

Hill said MTS, a seminary ecumenical mission of the Cumberland Presbyterian Church, has some 200 students taking classes during any given semester. Hill calls MTS a “melting pot of the church.”

“Of our students during any given semester, we have 30 different denominations represented,” Hill told the Rotarians. “ Our mission statement is that we educate and sustain men and women for ordained and lay Christian ministry in the church and the world. Beyond just teaching, we get in the trenches with folks who are seeking ordination.”

Hill, a graduate of the University of Mississippi and Memphis Theological Seminary, came back to the seminary from Blue Mountain College, where was vice president for community relations and was also pastor of Ripley Presbyterian Church.

He said it costs about $20,000 a year to educate one student, but thanks to donors, supporters and ministry partners, students are charged less than half the amount in tuition and fees.

“People don’t have a huge load of debt when they finish seminary because we do, not only educate, but sustain them in that journey,” Hill said.

Hill also said he was proud to call MTS “a diverse seminary” in ethnic and spiritual diversity.

“Our students are learning from each other,” Hill explained.  “We want to create a place where we don’t always agree but can we agree to disagree and have those conversations instead of arguments, and learn from each other.

An important part of the ministry of MTS comes in preparing people for chaplaincy. Hill pointed out that many of the chaplains who are at hospitals in the Mid-South, including St. Jude and the hospitals in DeSoto County came through MTS.

“We also have a huge population of military chaplains that serve our country faithfully and diligently,” Hill added.

While at Ole Miss, Hill played football and was a teammate of the late Chucky Mullins, who was paralyzed during a Rebels football game,

Nearly eight years ago, Hill wrote a book about Mullins and the impact Mullins’ life and experiences post-injury have had on others. The Chucky Mullins Effect was published in August 2014.

Hill said Mullins had a strong influence on his life.

“Chucky Mullins is the best guy I ever knew, how he overcame adversity,” Hill said. “I like to say life often frowned upon him and everytime it did he met it with a smile.  He was just a wonderful guy, he changed my life and changed many others. It’s a sad story but it’s the good that came out of it.”

Today, Hill appreciates the opportunity to be “chief servant” to those who would be the future faith leaders of the church.