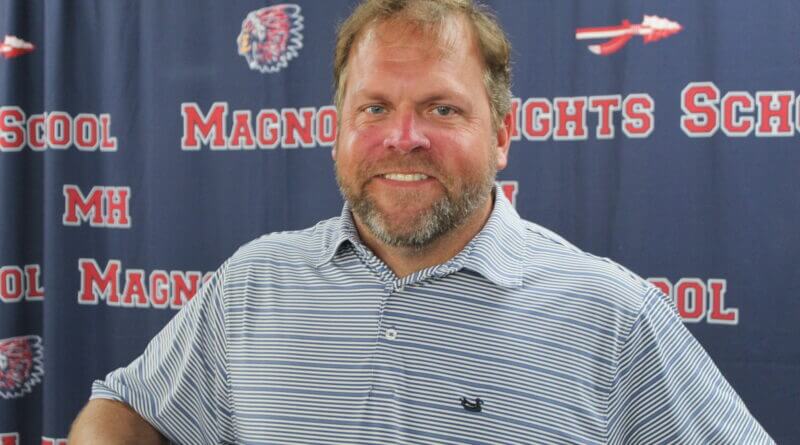 When the Magnolia Heights School football Chiefs take the field in August, a new man will be coaching them on the sidelines.

With longtime football coach Cliff Young stepping away, the Senatobia school has introduced Russ Whiteside as the new leader for the varsity program. Magnolia Heights held a meet and greet for parents and supporters to meet Whiteside at the school Wednesday late afternoon and evening.

Whiteside comes to Magnolia Heights from Heritage Academy in Columbus, where he has been the school’s head boys’ basketball coach.

But Whiteside also knows his football, having also been the Patriots defensive coordinator. The move to Magnolia Heights is actually a return to his coaching roots.

“I was here for 11 years from 2003 when I came as head basketball coach and assisted in football,” Whiteside said Wednesday. “Cliff Young was the head coach then and Bobby Bouchillon, who is the high school principal now, was also an assistant coach on that staff. I think in those 11 years we played in five state championships, so we were blessed during that time to have some really good players.”

It’s been a commitment of a lot of time as a coach in more than one sport for Whiteside, primarily on the basketball court, but also on the football field. Whiteside felt it was time to step back a bit from one sport, and the football field had a particular draw.

“I’ve always coached football but I’ve really started to enjoy it more over the last few years,” he said. “My kids are growing up and they’re going all different directions. It was time for me to give up and have some more time to spend with family.”

While Whiteside now concentrates on one sport, a school the size of Magnolia Heights must have athletes who compete in multiple sports. They may put the football helmet down one day and head to the basketball gym or batting cage for baseball the next. Whiteside said that routine is to be expected and be advantageous for the athletes and the programs.

“I think most of the time when you talk to college coaches they want to know if you’ve been a multiple sport player,” Whiteside said. “They want you to have played more than one sport. We’ve got to have that because in a school this size you have to share athletes, but we’ve got to make it inviting for all of these kids to play each sport.”

Whiteside said Magnolia Heights has always been a good football school that is run the right way, so the opportunity to coach at the Senatobia school “was a no-brainer, really,” he said. Whiteside expects to field a squad that will have the same successful formula that Chiefs’ football has always been.

“You’ll see a team out there that’s fundamentally sound, that works extremely hard and plays a physical brand of football,” Whiteside said. “If you ask somebody else what Magnolia Heights football has been, you’ll get the same answer. Being really sound with what we do and having a bunch of hard-working kids that really love to play the game.”

Having to go back-and-forth between Heritage Academy and Magnolia Heights, Whiteside has been able to have some time with his players and he likes what he sees.

“In the weight room, they work really hard,” Whiteside said. “I’m not surprised by that because of the staff that’s here. There doesn’t have to be a ton of change, so they’re working and I’m thankful that they’re continuing to work for me until I can get here full time.”