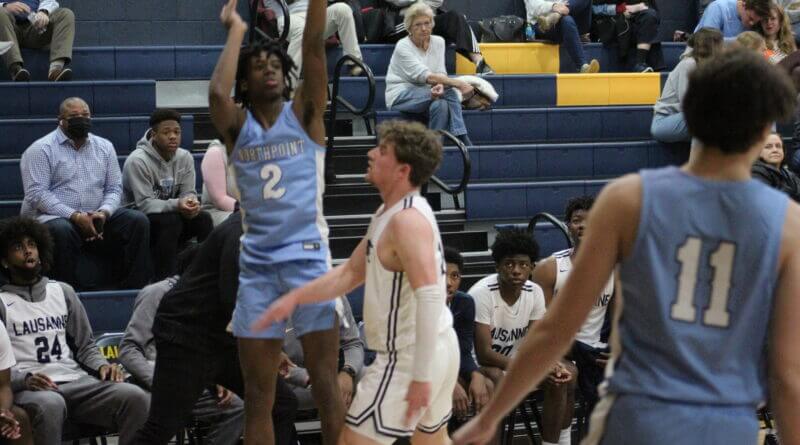 Northpoint Christian School survived a second-half comeback and a clock operator “asleep at the switch” at a critical moment as the Trojans defeated Lausanne Collegiate 55-52 Wednesday night at Lausanne.

Oh, and it certainly helped that Christian Gilliland, one of the Memphis metro area’s top offensive threats, poured in 29 points for the Trojans in the victory.

With the result, Northpoint assured itself of a home playoff game in the opening round of the TSSAA Division II-A West Region basketball tournament on Saturday.

But the exciting contest, which featured Lausanne rallying from a nine-point halftime deficit to take their first lead in the opening seconds of the fourth quarter, was overshadowed by what happened in the final 6.1 (and likely more) seconds of the game.

Northpoint coaches and fans were vehemently protesting the clock error during the timeout to the officials, who were aware something was amiss. After a lengthy conference on the court the officials had the clock adjusted to one second.

With the inbound play after the timeout coming underneath the basket, the one second still allowed the Lynx to get the ball to Hayden Ledbetter, whose desperation three-point try to tie the game bounced off at the buzzer.

“The guys just refused to lose,” Northpoint coach Barry Gray said. “They knew a win meant a home playoff game and it meant a better seed with who we match up with. They just showed a lot of grit.”

The Trojans took a 16-14 lead after one quarter, led by Gilliland’s 11 first-quarter points. Gilliland continued his hot shooting in the second quarter with nine points, all from the floor with one three-point shot, as Northpoint went to the locker room at half time leading 34-25.

“I think our defense was unbelievable in the first two and a half quarters,” Gray said. “Then we had a bunch of turnovers that got them back in the game. Their crowd and energy kind of took over and got us in scramble mode.”

Lausanne had apparently seen enough of Gilliland, who in the third quarter was closely guarded all over the floor by Tyler Wilson in an effort to keep Gilliland from scoring. While held to nine points in the second half, Gilliland was perfect in five free throw attempts, including two important throws late in the game that helped set up the eventual three-point margin.

“I told him that was big time basketball,” Gray said about Gilliland. “He wanted it and went out and got it.”

Picking up the slack in the second half was Darius Naylor, who scored eight of his 14 points for the game after halftime.

Ledbetter finished with 20 points to lead the Lynx, but no one else scored in double figures.

The Northpoint girls had a much easier time in their game against Lausanne, winning by a score of 68-41. Brylee Faith Cherry led the way for the Lady Trojans with 25 points, followed by Bethany Wright with 15 and Izzy Carlson.

Gray said he was pleased at how his team rallied after trailing early in the contest.

“We got down in the first quarter, but I was excited about how we responded,” he said. “We got hit in the mouth and then fought back from that.”

The Northpoint girls will get a bye in the first round of their TSSAA Division II-A West Region basketball tournament and will host an opponent to be determined at home on Monday.