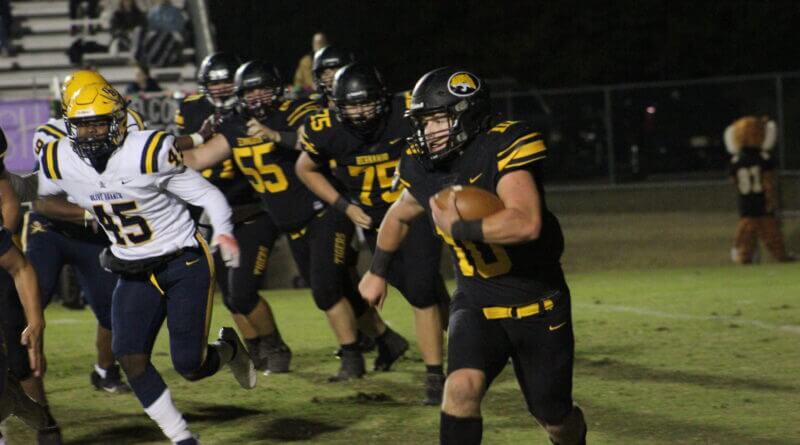 The Hernando High School Tigers football season hung with the result of one play Thursday night. It all came down to one thing: keep the Olive Branch offense out of the end zone and head into the playoffs, or see the hopes of returning to the MHSAA 6A postseason be dashed with a last-second Conquistadors’ touchdown.

From about the Hernando 21 yard line, quarterback Brayden Wright and the Quistors’ offense had gotten within striking distance. However, the clock had wound down to 1.8 seconds left in the game and no Olive Branch timeouts remaining.

It was up to Wright to find a receiver open and in the end zone to “snatch victory from the jaws of defeat,” as one might say. The Olive Branch quarterback never got the chance, however, as he was sacked behind the line of scrimmage as the clock hit zeroes, a moment captured on video thanks to Keith Fulcher of Hernando.

It was the finish Hernando needed to return to the 6A playoffs, where last season the Tigers reached the second round before losing to eventual state runner-up Oxford 41-26.

“I’m super-excited for these kids,” said Hernando coach Will Wolfe after the game. “They’ve played really good football this year.”

Hernando took a 9-7 lead into halftime Thursday night, scoring first with 10:30 left before halftime on a three-yard run from Christopher Jones for a 6-0 lead. Jones took a direct snap and plowed into the end zone for the first score. A fumbled snap on the extra-point try kept the Tigers just six points ahead after the touchdown.

Olive Branch recovered and took the lead about seven minutes later, when standout running back Tralyn Oliver scored the first of his two touchdowns for the night, going over from three yards away with 3:24 remaining before halftime. The extra-point kick was good to give the Quistors a 7-6 lead.

However, working quickly and moving the ball downfield, Hernando snatched the lead back with 1:44 left in the half on a 30-yard field goal from Jackson Uselton.

In the second half, Olive Branch scored first when Oliver scored his second TD for the game, a 25-yard dash downfield for the score and a 14-9 lead with 5:58 remaining in the third quarter.

But set up by a 70-yard pass play from Zack Wilcke to Joey Davis putting the Tigers down at Olive Branch 10, Wilcke completed the drive with a two-yard run for the score and when Jones found Bo Brankstone with the two-point pass completion, Hernando had a 17-14 lead with less than two minutes to go in the quarter.

Hernando started to put the game away in the fourth quarter with a 26-yard touchdown pass from Wilcke to Eli Mashburn, a score that gave the Tigers a 24-14 lead with 5:45 left in the contest.

But, Olive Branch came roaring back with Wright’s 12-yard scoring run putting the Conquistadors within 24-20 when the extra-point kick try failed.

That set up the final excitement when the Quistors got possession of the ball on the ensuing onside kick and drove to the Hernando 21-yard line, before time ran out and the Tigers’ defense made a play when they and their season needed it.

“It was back-and-forth, just a great game,” said Wolfe. “We fought well, but we left some points on the field tonight, so we gotta go back and look at the film. We have a lot of stuff to work on, but we’re going to enjoy tonight.”

Here are the pairings for the North Half first round games in Class 6A and 5A. Games to be played Friday, Nov. 12.

Northpoint Christian will begin the TSSAA Division II-AA postseason Friday night against Silverdale Academy (Chattanooga, Tenn.) in a game to be played at Lipscomb Academy in Nashville. The Trojans are 5-5 on the season and will play a Seahawks team that is 8-2 on the year. However, Silverdale has won just two of its last four games, including last week’s 35-0 loss to Christian Academy of Knoxville.  Northpoint also has to bounce back from its 42-7 loss last week to Lausanne Collegiate (Memphis), the lowest scoring output of the year for the high-powered Trojans’ offense.