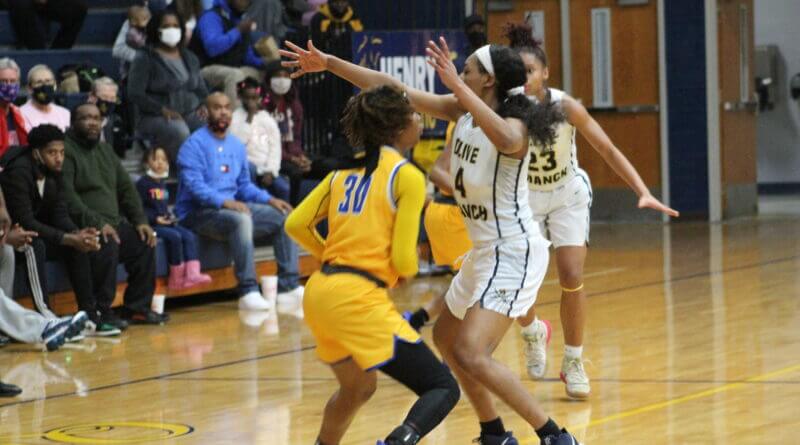 MHSAA 6A soccer playoffs, first round

MHSAA 5A soccer playoffs, first round

OLIVE BRANCH WASHES OUT THE WAVE IN SWEEP

The Olive Branch basketball Conquistadors and Lady Quistors defended their home court and set themselves for being the top seeds in the upcoming 6A district tournament with a pair of victories over Tupelo Tuesday night in Olive Branch.

The Conquistadors stopped the Golden Wave 55-51 after the Lady Quistors beat the Lady Wave 66-60.

The six-point difference in the final score was significant for defending MHSAA 6A state champion Olive Branch in that the victory avenged the Lady Quistors’ only loss of the season. More importantly, winning the game by six points gives Olive Branch the tiebreaker for the top seed for the postseason division tournament if Tupelo and the Lady Quistors indeed are tied in the standings after next week. Olive Branch needed to win by that margin to earn the tiebreaker.

The Lady Quistors and Lady Wave battled throughout. Tupelo took a 17-15 lead at the end of the first quarter and led 36-34 at halftime.  Both teams matched each other point-for-point in the third quarter as Tupelo hung on to their two-point margin at 53-51 entering the fourth quarter.

But that’s when the Olive Branch pressure defense kicked in, holding the Lady Wave to only seven points the entire fourth quarter, outscoring Tupelo 15-7 in the final eight minutes for the victory.

“My young ladies answered the bell,” Lady Quistors coach Jason Thompson said. “We had a lot of things that miscued and we played outside of the character of what we typically do, but we kept battling. Sometimes you have to just fight through and persevere.”

Amya Black led the Lady Quistors with 17 points against Tupelo, with 11 of that total coming in the third quarter.

“A senior, she stepped up and played real big,” Thompson said. “She’s a very hardworking kid that knows how to play the game.”

Brynea Eason hit a trio of three-pointers in the first half on her way to a 16-point performance and Addison Howell was a perfect 5-for-5 at the free throw line as she finished with 15 points.

The Conquistadors, minus two starters out with injuries, defended its claim to the number one seed in the 6A district tournament with its four-point victory over Tupelo. As in the girls’ game, the difference came in the fourth quarter of play.

Both teams traded points in the first quarter to a 10-10 tie and a 21-21 halftime score. The duel continued in the third quarter to a 36-36 tie but the Quistors got just enough scoring in the final eight minutes for the victory.

Tupelo couldn’t handle Olive Branch’s Terry Joyner, who finished with a game-high 22 points, which included 11 in the first half and whose pair of treys in the final quarter cap off the night for the Quistors.

“Terry has been stepping up for us the last handful of games,” Olive Branch coach Eric Rombaugh said. “He’s been scoring well. But I don’t know if we have one guy that another team can focus on to try and take him away from us.”

“When Webb and Joyner play defense like they did tonight and the way they rebounded, it takes a lot of pressure off our guards,” said Rombaugh.

Lamarus Miller was the leading scorer for Tupelo with 11 points, but he was held to only a fourth-quarter two-point basket in the second half.

“It was a great team effort,” said Rombaugh. “We’ve been focusing a lot on our defense and the boys tonight came out and really played hard and smart.”

At 4-1 in district play Rombaugh believes they should be the top seed in the postseason district tournament, but knows it’s going to be a battle advancing into the state playoffs.

“Any of us can beat anybody else on a given night,” said Rombaugh.