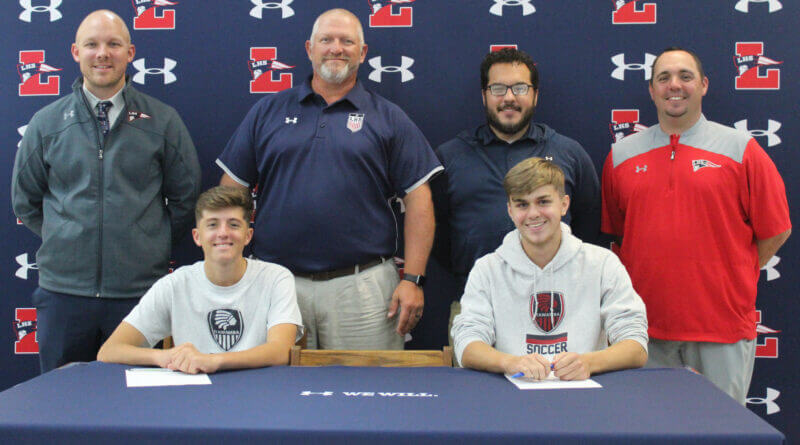 While top high school football players were committing to play at major universities on National Signing Day Wednesday, two Lewisburg Patriots were signing to play the other sport called football, commonly known here as soccer, at the next level.

It’s a program under coach Mike Sullivan that this fall won the North Division championship in the MACCC and reached the semifinals of the NJCAA Region 23.

It’s a program that this summer also plucked Blake Lashlee from his spot as assistant coach at Center Hill High School and brought him to Itawamba for his first collegiate coaching job at his junior college alma mater.

Itawamba is where Lashlee played in the 2014 and 2015 men’s soccer seasons for the Indians.  Lashlee was part of the Center Hill MHSAA 5A state championship team as an assistant coach.

Gage Lashlee and Payne have been leaders on this season’s Lewisburg soccer squad, a position player since his freshman year and the other as utility player willing to handle nearly any position, according to coach Harl Roehm.

“Gage Lashlee has been with us on the varsity since he was a freshman as a center mid(fielder). He is a truly talented kid with exceptional footwork, is great at finishing, see the field really well and has a high soccer IQ,” Roehm said about Lashlee.

In talking about Payne, Roehm praised his senior’s ability to step in where needed.

“Hogan actually started for us as a defensive midfielder and both he and Gage started for us when we won State,” Roehm said. “Hogan was our only defensive midfielder when we won that year. The next year he moved to left wing for us because that was a hole we had at that position. He scored 19 goals in 20 games for us. Last year he fought through a knee injury and played right wing and this year he’s playing center midfielder.”

Roehm believes moving up to junior college soccer next fall will definitely help their growth in the sport.

“Junior college soccer has been way-under recruited in North Mississippi,” Roehm said. “Guys are starting to realize that it’s a better fit for most players to go the community college route for the first two years and get a chance to play.”