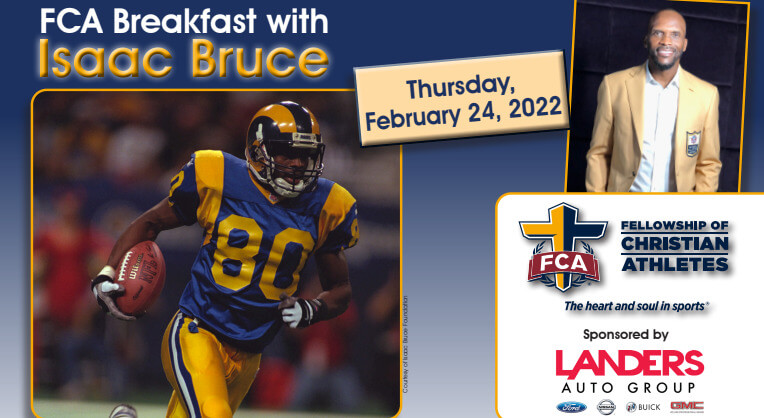 Pro Football Hall of Famer Isaac Bruce will be the featured speaker at the 8th annual Fellowship of Christian Athletes annual fundraiser breakfast. The event will be held at the Landers Center on Thursday morning, Feb. 24, 2022.

Bruce starred as a wide receiver for the St. Louis and Los Angeles Rams and the San Francisco 49ers. He was drafted by the Los Angeles Rams in the second round (33rd player overall) of the 1994 NFL Draft. His selection to the Pro Football Hall of Fame came in 2020.

He was also a star receiver at Memphis State University after transferring from Santa Monica College in California.  With Memphis, Bruce became the first wide receiver in school history to post a 1,000-yard receiving season. He finished the season with a school-record 74 catches for 1,054 yards and 10 touchdowns.

Bruce is currently the athletic director at University of Fort Lauderdale, a Christian college with HBCU roots, having taken the position in 2019.

For information on tickets or sponsorships, contact Cecil Sowell with the Fellowship of Christian Athletes at 901-409-1927 or by email at csowell@fca.org. You may order tickets online at the FCA website.