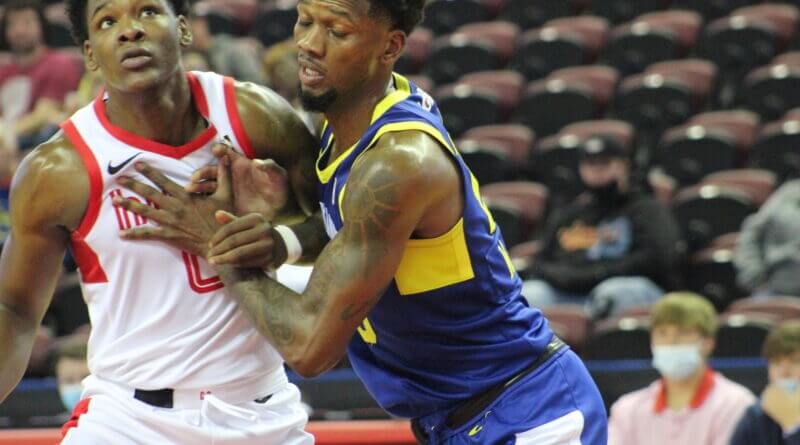 They were in their home arena but they were not the home team. They played the American and the Mexican national anthems. The video wrap around the building promoted souvenir sales for the visiting team that was the home team. Such is life in the opening weekend of the NBA G League.

Sunday, the Memphis Hustle wrapped up a two-game series with Capitanes de la Ciudad de México (Mexico City Capitanes) with a 110-106 victory after losing the season opener Friday by a 95-90 score.

As part of a three-team expansion this season, Mexico City joined teams in Birmingham, Alabama and in Detroit into the NBA G League. Mexico City is playing this season only in the league’s Showcase Cup, a series of 12 games at the beginning of the year between teams paired into four regional “pods.” This weekend’s contests were the first games of the Showcase Cup for both teams. Capitanes is declared the home team for each game they play in the G League this year, hence the home team atmosphere they enjoyed in the Hustle’s Landers Center.

While the Hustle will continue playing a 36-game regular season after the Showcase Cup is done, Capitanes’ first year in the G League will be done due to COVID-19-related travel restrictions keeping the rest of the league from playing in Mexico.

Memphis’ victory Sunday came with the benefit of seven players scoring in double figures, led by assignment player Sam Merrill, first-year pro from Utah State, hitting for a team-leading 20 points, six rebounds and five assists. Merrill scored nine of his 20 points in the first quarter alone, as the Hustle took a 30-25 lead after 12 minutes of play.

“We had him in the ‘bubble’ last year for a little stint,” said Hustle coach Jason March of Merrill. “He can make shots and he handles the ball well. We were lucky to have him today.”

Capitanes cut the lead by one to 55-51 at halftime.  The teams matched each other point-to-point the rest of the game, although the Hustle had as much as a 12-point margin at one point in the fourth quarter.

Ahmad Caver finished with 16 points for Memphis in the win, followed by Shaq Buchanan’s 15 points, along with 14 points each from Matt Hurt and Jarrett Culver.

March was happy to get the “fresh legs,” as he called them, into Sunday’s lineup.

“The other night we just ran out of gas,” March said. “It was great having these guys with us tonight. It’s about competing the right way and top to bottom that’s what they did.”

After just two games now, the Hustle will get an extended break until Nov. 16, when Memphis returns to the Landers Center for the first of two games against the Texas Legends as the Showcase Cup continues. This time, the home team will actually be the home team for the pair of contests.

MASCOT MYSTERY SOLVED: Along with advertising for Capitanes’ team souvenir and clothing in the arena, Landers Center fans this weekend were introduced to the Capitanes’ mascot, a strange-looking character named Juanjolote. The team’s website explains Juanjolote as an amphibian basketball fan. Called an Axolotl, the creature is found exclusively in the lake complex of Xochimilco, near Mexico City and can live up to 15 years living off mollusks, worms, larvae, and some fish. Axolotls are considered a critically endangered species.