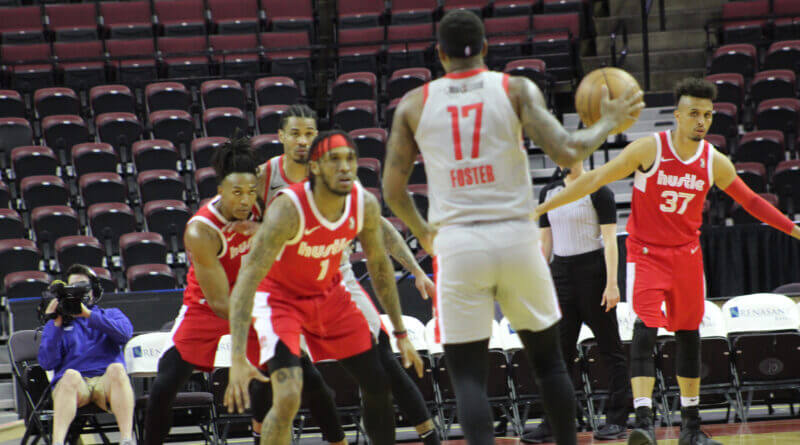 While the Hustle entered the game having a hand on the steering wheel of the vehicle heading toward making the G League playoffs, someone else controls the Hustle’s postseason destiny, or if they have one at all.

The Hustle can wrestle the steering wheel back, but will need to win their last two games, Tuesday night against the Stockton Kings, and Saturday’s regular season finale at home against the Birmingham Squadron.

That’s the good news for the Hustle. The bad news is that Memphis faces the two teams above them in the chase for a playoff spot and the Kings are the team they can catch, with a win Tuesday and Saturday, and another Stockton loss against either Birmingham or their season-ending contest against the Salt Lake City Stars.

Another bad for the Hustle is in the season of short rosters, injuries, and call ups is that Memphis is just 4-10 at home after Monday’s loss with the last two games at home.

Rio Grande Valley, now 24-8 for the year, is the top team in the Western Conference, but had not defeated the Hustle in two previous meetings, both played on the Vipers’ home floor in Edinburg, Texas. However, the past two games needed overtime to be determined, 139-131 (four overtimes) on March 19, and 128-126 (one overtime) on March 21.  The Vipers also lost to the Hustle twice in the Showcase Cup.

Rio Grande Valley made sure no bonus basketball was happening Monday night, turning a 13-point deficit in the first half to the 13-point victory, leading by as much as 19 at one time in the second half.

Six Vipers scored in double figures, led by Mfiondu Kabengele with 27 points and Anthony Lamb’s 25. Marcus Foster scored 23 points for the Houston Rockets affiliate and three other players scored 12 or more points in the victory.

The offensive star of the game, even in a losing effort, was the Memphis Hustle’s Santi Aldama. Coming back to the Hustle roster after a short call to the Grizzlies, Aldama made his presence felt all over the floor with a career-high 36 points and 11 rebounds.

“Especially in the first half, he was great for us,” said Hustle coach Jason March. “He was on the glass, setting screens, getting out quick, all of those things. He really helped us tremendously.”

Four other Hustle players scored 10 more points, with Ahmad Caver finishing with 15 points and Shaq Buchanan was held to 14. Buchanan entered the game averaging 21.1 points per game and Caver nets an average of 16.1 points a contest.

Monday’s game resembled past games for March, bemoaning that his team couldn’t come up with a complete game effort.

“For some reason, when these two teams have played each other, we’re the first half team and they’re the second half team,” March said. “We just have got to put together four quarters, that’s the message.”

Memphis took a 63-54 lead at halftime, thanks to a 35-point second quarter and a 13-point lead at one time.

However the Vipers’ second half attack was punctuated by a 43-point third quarter, finishing with 71 second half points.

Much of that was fueled by 18 three-point shots for the game, several initiated by 18 offensive rebounds, an issue also concerning to March.

“We gave up 18 offensive rebounds and that’s just extra possessions for them,” March said. “The way they shoot the ball, we’re usually giving up a three when they get those offensive rebounds. It’s what they do and they do it really well.”

Tuesday’s key contest against the Stockton Kings starts at 7 p.m. at the Landers Center in Southaven. Stockton (15-15) could conceivably nail the Hustle out of the playoffs with a victory.