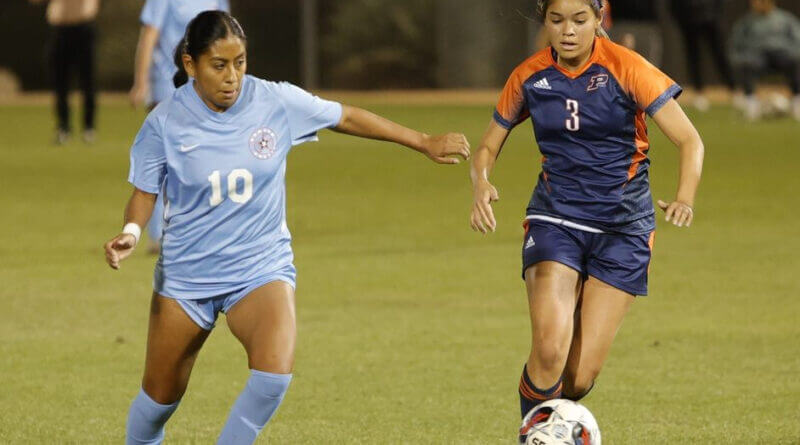 For only the second time all season and the first match in nearly two months, Northwest found itself in a unique situation at halftime of its match against Pima (Ariz.).

Pima led the Lady Rangers 1-0 at the break, putting Northwest in a halftime deficit for the first time since a regular season draw at East Central back in September. To make things even more challenging, Pima was the tournament host and the crowd was mostly pro-Aztec fans, making the match feel even more like a road contest.

However, despite all the obstacles, sophomore Melinda Hernandez stepped up with the biggest performance of her career, scoring both Northwest goals in what would go down as a 2-1 double overtime victory for the Lady Rangers.

Pima came out aggressive from the opening whistle, quickly earning a corner kick just 30 seconds in. Caitlyn Maher would soon provide the Aztecs their first goal in the 11th minute, burying Northwest in the 1-0 deficit.

Although the Aztecs finished 4-1 in first half shots and continued to keep the momentum for the duration of the first half, Northwest found a spark to open the second half, quickly firing off some shots of its own to test the Pima defense.

That spark quickly became a flame for the Lady Rangers just five minutes into the second half, when a free kick led to a goal from Hernandez, tying the match at 1-1. The score also broke a long scoring drought for the Bryant, Ark. native, who had not scored since a September 3 victory against Mineral Area College.

Despite the equalizer, Pima still had chances to take the lead, even with momentum shifting back in favor of the Lady Rangers. The Aztecs seemingly scored in the 70th minute, but were ruled offsides, negating the score. Later in the half, Pima also had a shot ricochet off the crossbar and bounce directly down in front of the net, only to be sent out by a Northwest defender.

Northwest also had its chances to add to the drama in the second half, taking five total shots with two on-goal. With neither team able to score, the win-or-go-home match was carried into overtime, where the Lady Rangers nearly scored on a header. Pima also had a chance to score in double overtime, breaking away for a one-on-one against goalkeeper Addy McCann, only for the Aztecs’ shot to go high and out of play.

Just when it seemed like the match was destined for another dramatic penalty kick shootout, Hernandez came through once more, scoring in the 108th minute to advance Northwest out of Pool D and into the semifinals.

For Hernandez, the win marked only her second two-goal match of the season, with the other coming in an 8-0 victory at Southwest Tennessee back in August. She now has seven goals and five assists on the season, tying her with Dani Rodriguez and Avery Hooker as the team’s fourth-leading scorer.

Pima outshot Northwest 11-8 for the match, but only earned a narrow 5-4 shots on-goal advantage. McCann was credited with four saves and improved her season record to 14-1-3.

Northwest was whistled for 10 fouls against just five for Pima. The Aztecs also had three of their players charged with cautions, including an ejection for Delaney Buntin after a hard foul in the 83rd minute.

With the win, Northwest improves to 15-1-3 on the season and will advance to the NJCAA Semifinals on Friday. Three of the four remaining teams in the tournament field are from the MACCC, as Holmes and Jones College will face each other in an 11 A.M. semifinal showdown, followed by the Lady Rangers’ bout with Phoenix College on Friday at 1:30 P.M.

All matches from the national tournament can be seen live on the NJCAA Network with a pay-per-view package.