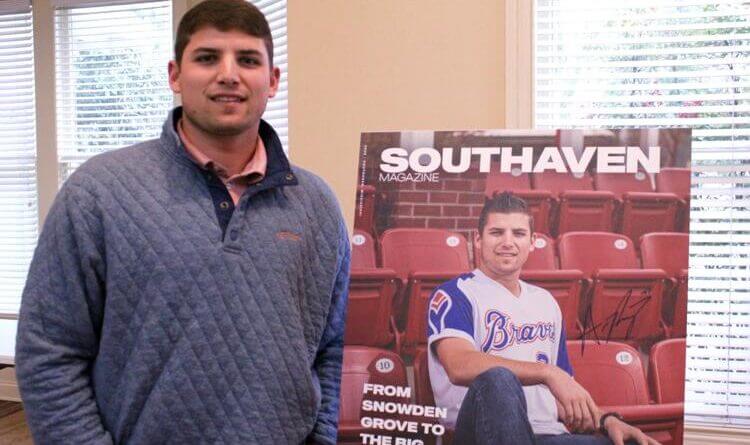 Photo: Austin Riley of the Atlanta Braves poses with the cover of the Southaven Chamber of Commerce Magazine when the publication featured him. Riley’s DeSoto Central jersey number 13 will be retired at DeSoto Central on Feb. 6 at 12 noon.

One of the best baseball players to ever take to a DeSoto County high school diamond will have his jersey retired during an event on Saturday, Feb. 6, beginning at 12 noon.

Austin Riley, now with the Atlanta Braves, helped DeSoto Central to a MHSAA 6A state championship in 2015 and was the state’s Gatorade Player of the Year in 2014. Riley’s number 13 jersey will be retired in an event open to the public on the DeSoto Central baseball field with Riley on hand.

“This is an opportunity to recognize one of the most decorated players in our program’s history,” DeSoto Central head baseball coach Mark Monaghan said. “Austin’s career at DC left an impact on the program, his teammates, and the state. His work ethic was always second to none, which led him to great success with the Braves and has helped him become an everyday starter at the major league level. We are excited for this occasion, and we’re proud of Austin and all of his accomplishments.”

Riley played third base, shortstop and was a pitcher for the Jaguars when he played for DeSoto Central.

Riley was drafted by the Atlanta Braves in the first round (41st overall selection) of the MLB draft in 2015. He made his MLB debut with the Braves four years later in 2019 and homered in his second MLB at-bat.

In May 2019, Riley earned the NL Rookie of the Month Award, despite playing in only 15 games. In 2020, Riley played in 131 games, including 12 playoff games, and he busted onto the national scene with his Game 1 home run in the National League Championship Series against the Los Angeles Dodgers.

In case of inclement weather, the Feb. 6 event will move inside to the DeSoto Central gymnasium. It is open to the public but there will be no pictures or autographs given. Those attending are expected to abide by COVID-19 regulations and will be required to wear a mask and socially distance.