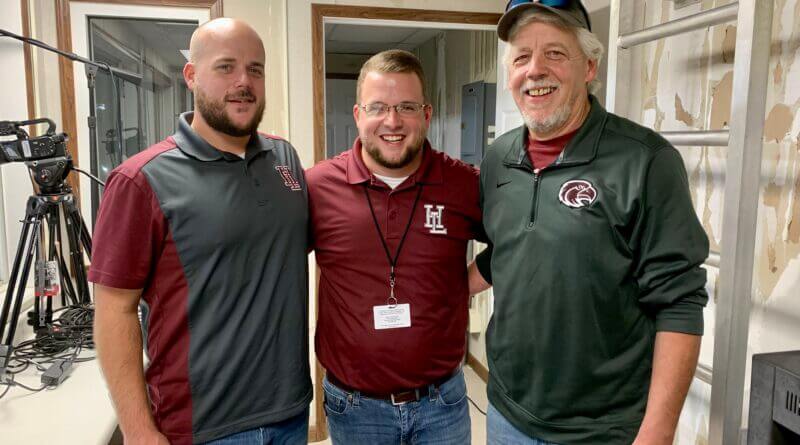 Keeping fans informed about plays during a football game, providing promotional or other messages, and sometimes acting as another cheerleader to get the fans more involved falls on the person behind the microphone in the press box… the public address announcer.

At Horn Lake High School, there are two voices that fans hear during the evening when the Eagles take the gridiron for another home football game, part of a three-man team to keep the fans informed and engaged in the action.

It’s a family affair in the press box for Jackie, Cole, and Clyde Bostick, and they have been doing it for now five seasons.

When you hear who carried the football or who made the tackle, the down and distance, that’s the elder of the three. Jackie, who is also a Horn Lake alderman, provides those announcements with the help of son Clyde, who is the spotter and shows Jackie on a roster sheet the players who made the plays.

In between, you’ll hear Cole, a Horn Lake High School instructor, announce other messages that include specific “shout outs” to players from mom, dad, or another family member.

“We love football and we love the Horn Lake Eagles,” Jackie said about the PA announcing. “I actually did the chains for about 10 years and then moved up here. I asked Clyde to come up and be my spotter.”

“There’s no better way to spend a Friday night,” Clyde added. “I spot and fill in on PA when these guys are busy doing other things.”

While the three enjoy every night the Eagles take the field in front of them, the 2018 season is the most memorable. That was the year Horn Lake finished 15-0 and won the MHSAA 6A state football championship.

The job of the public address announcer at football games is an important part of the experience and at Horn Lake High School, it really is a “family affair.”