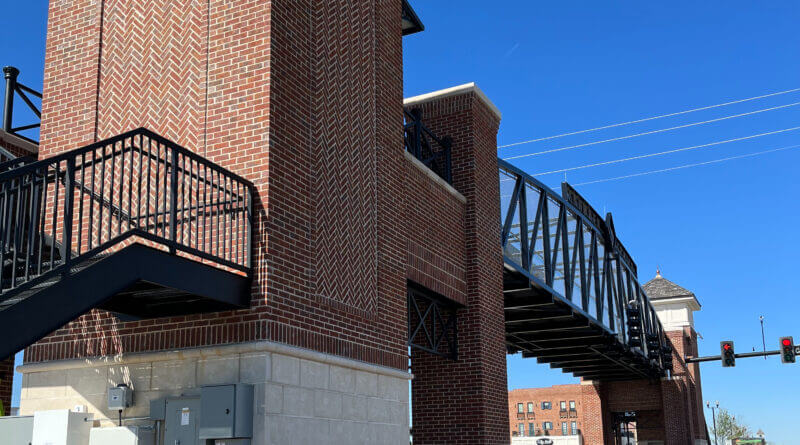 Southaven celebrated the official opening of the May Blvd. Pedestrian Bridge over Getwell Road Thursday, a bridge that will connect Snowden Grove Park and the Silo Square district and become a new icon of sorts for the state’s third-largest city.

Thursday’s opening was also well-timed with the Springfest celebration at Snowden Grove Park set to begin on April 19, although the bridge was supposed to be opened last fall..

The 95-foot span is 42 feet high at the towers on each end of the bridge.  Thursday’s event was actually delayed from its original September opening when supply chain issues connected with the COVID-19 pandemic kept parts and other items for the handicapped accessible elevator in particular from its scheduled arrival for installation.

Musselwhite said the design is part of his vision of “dressing up” Southaven to show pride in the city, similar to the new welcome signs that have been located in main entrances.

The bridge, with an estimated cost between $1.3-$1.9 million, also serves as a traffic signal which was needed for the growing traffic along Getwell Road.

The bridge will connect the pedestrian and biking paths that have been developed from Snowden Grove through Silo Square and on to Central Park. Musselwhite said there will be businesses developing on the east side of Getwell that will also use Silo Square with the bridge. It also serves traffic safety as an overhead connector between both sides of Getwell.

The mayor felt it was the right decision for the bridge to be constructed.

“Let’s bring things to Southaven that have never been here before that we’ve seen in other parts of the country,” Musselwhite said. “This bridge is the right decision.”

In acknowledging the public officials who were on hand, Musselwhite took a moment for a special mention and thanks to state Sen. Dr. David Parker (R-Olive Branch) and his fight for the tourism tax repeal extension that passed the Legislature this session. Parker was in attendance for the grand opening and ribbon cutting event.

It is the “Penny for the Parks” restaurant tax in Southaven that has funded many of the park and recreation improvements in recent years the bridge is helping to connect.

“When you do what is right, some people who don’t want what’s right are going to fight you,” Musselwhite said. “David Parker outdid himself. He’s always been a good senator for us.”

With that and with the photo opportunity for others on the bridge stairwell, Musselwhite cut the ribbon and led those attending the first official crossing to the Silo Square side.

You get a view of the traffic from above Getwell Road in this video clip.