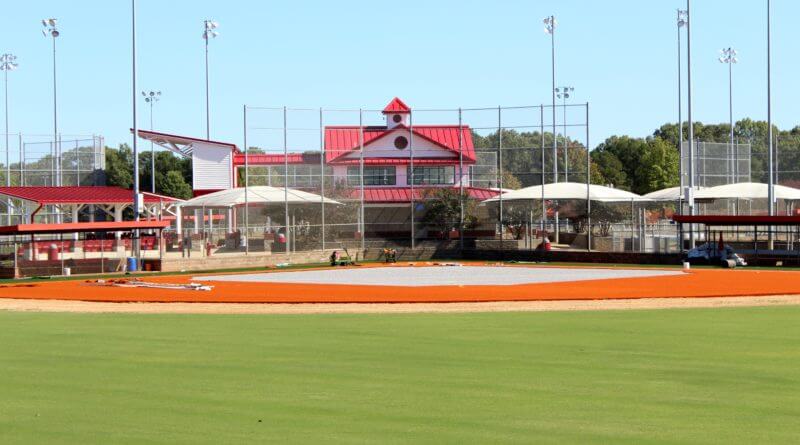 Photo: Park improvements, including last year’s installation of a turf surface for Snowden Grove Park and Greenbrook Park baseball and softball fields, came funded through the “Penny for the Parks” local tax on restaurant sales in the city. (Bob Bakken/DeSoto County News)

Over the past several years, a local and private bill from the state Legislature has allowed the City of Southaven to receive a one-percent tourism tax on restaurant sales in the city.

What has become commonly called the “Penny for the Parks” local tax has helped to fund much of the parks and recreational improvements Southaven now enjoys: walking trails, the soccer complex, playground, baseball and softball complex improvements, and others, all without an additional tax burden on city residents.

But the city is again having to battle with state legislators not willing to support the renewal of the local and private law that allows the “Penny” tax to continue past this summer,

After its initial approval, the “Penny” legislation was allowed to “sunset” in 2017 when lawmakers wouldn’t support it continuing for the city.

The reasoning, according to Mayor Darren Musselwhite at the time, was that a group of newly-elected legislators from DeSoto County was voting against similar legislation brought up from other parts of the state.

After a year of fence-mending, lobbying and detailed explanation by Musselwhite and others, the “Penny” tourism was voted back in and Southaven again was able to use the funds for the improvements that since have taken place.

Musslewhite reported at Tuesday’s special meeting of the Board of Aldermen that the legislation again was in trouble for similar reasons, naming state Reps. Dana Criswell, Steve Hopkins, and Dan Eubanks, specifically, for negative votes on other local and private laws being considered from other parts of Mississippi. All three are Republicans and all label themselves as members of the Mississippi Freedom Caucus, which is made up of six state legislators who are staunchly against any taxation increases.

The mayor labeled the “no” votes as “asinine.”

“It means extremely foolish or stupid,” Musselwhite said. “It is asinine for anyone to vote against a local and private bill that has no impact on their own citizens. Why would you go and vote ‘no’ on Brookhaven’s bill when the people of Brookhaven want it and their local delegate is for it?”, using Brookhaven as an example.

According to Musselwhite, there are numerous local and private bills that have come forward in Jackson and the three lawmakers have voted against them, even when they are supported in the communities where they originated.

“The House of Representatives is so bitter against these three people and they have said this to me directly,” Musselwhite said. “If a bill comes from DeSoto County, they are going to vote no, and they will vote no to retaliate against DeSoto County.”

In 2017, “Penny for the Parks” raised about $1.9 million to the city coffers in support of the park and recreation improvements. Now, the annual figure is about $2.7 million in revenue through restaurant sales to locals, and visitors, especially those who come to play in tournaments at Snowden Grove Park and then need a restaurant to eat at.

The atmosphere in Jackson toward local and private legislation for DeSoto County may also have an effect elsewhere. Horn Lake, for instance, gets $2 for each nightly stay at its hotels and lodging facilities for improvements.  Hernando is putting forth a similar bill to Southaven, but they would be getting two cents per dollar on restaurant sales. And there’s been talk in Olive Branch about local and private legislation to help their city.

Lawmakers may opt to vote against these local and private bills for the same reasons they appear to be ready to oppose Southaven’s “Penny” program.

The three lawmakers mentioned have not responded for their side of the issue past their traditional stance against any increases in taxes.