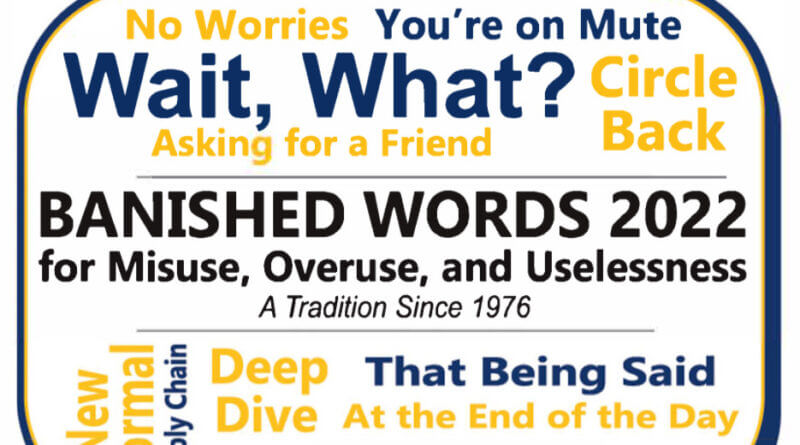 Have you ever heard a word or phrase and say, “Boy I’ve heard that way too much,” or “What does that all mean,” or they should just ban that word from the vocabulary?”

Well, a school in Michigan feels your pain and has come out with its Top 10 list of words they feel should be banned.

Lake Superior State University of Sault Ste. Marie, Michigan, has come out with its annual tongue-in-cheek Banished Words List, based on mock-serious submissions it has received over the year from around the country and around the world.  LSSU released its list on Dec. 31. ahead of the start for the new year.

According to LSSU, more than 1,000 of the 1,250-plus nominations of words and terms for banishment for misuse, overuse, and uselessness for 2022 were colloquial.

Number one on the list is the phrase, “Wait what?” These two four-letter words should not go together under any circumstances, according to many nominators and the contest judges from the LSSU English Department, because the two-part halting interrogative is disingenuous, divergent, deflective, and other damning words that begin with the letter d.

LSSU has compiled an annual Banished Words List since 1976 to uphold, protect, and support excellence in language by encouraging avoidance of words and terms that are overworked, redundant, oxymoronic, clichéd, illogical, nonsensical—and otherwise ineffective, baffling, or irritating. The Banished Words List has become such a cultural phenomenon that comedian George Carlin submitted an entry that made the annals in 1994: “baddaboom, baddabing.”

Here’s this year’s Top 10 words/phrases that should be banned.

5. Asking for a friend

You can read the entire news release and explanations on the selections in this release found from Lake Superior State University here.