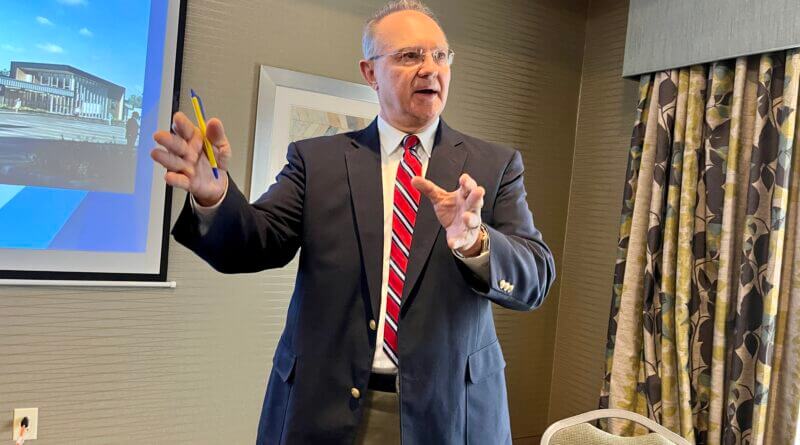 The DeSoto County Board of Supervisors board president gave an update on projects that are happening in the county Wednesday morning during the Hernando Main Street Chamber of Commerce “Grits and Government” breakfast gathering.

Later, Michael Lee spoke exclusively with DeSoto County News about what he expects to come at an upcoming meeting of the board regarding the medical cannabis issue.

There is a lot happening for projects in the county, as Lee pointed out, some of which are “moving dirt.” There are others that residents may not immediately see, but are happening. It’s all part of long-range planning supervisors do to get it all done. Amazingly, due to the continual county growth providing tax revenues, DeSoto County taxpayers have not had a tax increase in the past 18 years.

Some of the planned urban developments, also known as PUDs, appearing in the county are the Short Fork PUD of more than 600 homes with a town center, office space, a restaurant, and other amenities. Others included the Bright-Wilson and Camp Creek developments, just to name a few.

Lee also brought up road projects, such as the extension of Commerce Street East in Hernando to Jaybird Road, and another project underway to build a new Justice Court building near the Adult Detention Center.

The court building project includes a secure walkway between the jail and the court facility for inmates to be taken for court appearances.  The walkway will help ease security issues in transporting prisoners to court away from Hernando. It will also save county dollars in the costs of transportation.

“A jailer could walk an inmate for his initial court appearance on court day,” Lee said.  “They won’t have to load him up and take him all the way to Southaven and bring him back. This will eventually save the taxpayers a lot of money.”

Lee talked about plans for the proposed Agricenter park project near Starlanding and Gwynn roads, and was also able to provide a video update on road progress and expectations for Holly Springs Road and U.S. Highway 51 near the AWG Warehouse project.

Regarding medical cannabis, supervisors have set a Monday, April 25 meeting date at 8 a.m. to discuss the Mississippi Medical Cannabis Act, or SB 2095, which was signed into law back in February by Gov. Tate Reeves.

Cities in DeSoto County this week took action, or in some cases no action, regarding the chance to opt out of the law before a May 2 deadline date to do so. By taking no action, Olive Branch and Hernando have opted into the law. Horn Lake and Southaven have chosen to opt out while working through zoning issues.

DeSoto County also must decide if they will opt out of the law for the unincorporated areas of the county by the deadline date set by law. Supervisors can move to opt out, or they can do nothing and allow the county to be included in the law past May 2.

Lee expects the supervisors will be asking a lot of questions at the April 25 meeting, considered a recessed meeting from the item on the April 18 agenda.

Zoning questions are top of mind and, stirred by a question posed by Southaven Mayor Darren Musselwhite, state Attorney General Lynn Fitch late last week provided her opinion that governing bodies have more control on where they place dispensaries than many earlier thought they had.

Zoning is a question Lee also has considered about the law.

Lee went on to say he wants to make sure everybody is protected and aware of what is allowable under the law.

The move to have this special meeting, Lee said, is because this is an issue that couldn’t just be addressed during a regularly scheduled board meeting.

“It would have taken a lot longer to discuss what we needed to discuss,” said Lee. “Our attorney is going to bring those things up to us so we’ll understand a little bit more. I’d like to hear from him what he has to say and what we can do as a board.”

Expecting a large turnout on Monday, April 25, county officials said they would appreciate it if they were made aware ahead of time about those presenting to the board on the matter. That is not a requirement to speak but would be a courtesy to supervisors at what could be a lengthy session.