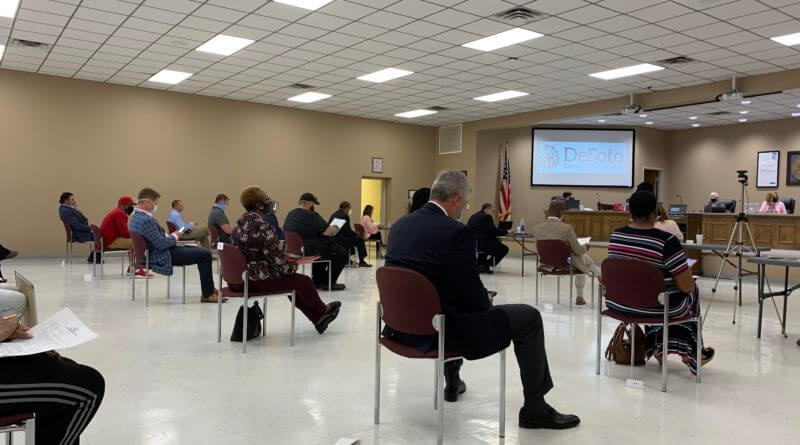 Virtual learning is not winning over a number of parents in the DeSoto County School District (DCS), who took their frustrations to Thursday’s school board meeting in Hernando.

Much of the discussion during the lengthy meeting lasting more than two-and-a-half hours centered on the Schoology program and what the parents said was a lack of communication between virtual students and their teachers.

Schoology is the way the district is offering instruction to students who chose to learn from home as a result of the coronavirus pandemic. Schoology is a K-12 Learning Management System based in New York, NY. Its website boasts more than 20 million students using the system across the nation and more than 60,000 schools using Schoology.

The district went to Schoology when it gave parents the option of virtual learning from home or sending their children to school.

But the parents who appeared before the school district Thursday expressed their frustration that the Schoology system is not teaching their children and they were mostly concerned that teachers are not effectively communicating with the virtual students, if at all.

“As a virtual learner, I am disappointed in the lack of concern and commitment to my learning,” said Kayla Tyson, a junior at Olive Branch High School. “I have asked my teacher and as of this morning I have yet to receive a response.”

Kayla’s mother, who also has a seventh-grader at Olive Branch Middle School, thinks there are better ways to present to virtual learners than Schoology.

“But five months and in a new school year, we should not be doing the same thing we were doing five months ago,” she said. “In our surrounding area, there are public and private schools systems that are offering VIP programs that have interaction with their teachers and classmates. Why are we not doing this in DeSoto County?”

Kayla also expressed disappointment that because she is a virtual learner, she cannot play for the Olive Branch High School volleyball team. She can attend home games and help the team in a managerial role, but regulations do not allow her to play.

“To me and other VIP (Virtual Instructional Program) students, this is not fair,” Kayla said. “It makes me feel like I am discriminated against. I don’t understand the decision to make this rule. I want to have interaction with my classmates and my teachers.”

That began a line of parents who had a similar message. Virtual learning is depriving their children from the education they would otherwise have if they were in the classroom.

The split of in-class and virtual classes has resulted in as much stress for teachers and their support staff as it has been for the parents concerned about their child’s education. District officials, recognizing the extra workload, have hired 70 additional “virtual” learning assistants who are assigned different tasks and who help wherever needed in their attendance center.

Some in-classroom teachers have also become strictly virtual teachers, assigned to focus on the VIP program instead of splitting their classroom time between in-class and at-home students.

Another effort to help the process has been the implementation of 70-percent Fridays, where students are released from class early on Friday with teachers and staff remaining to prepare lesson plans for the week ahead.

One parent, part of a group of parents who were at Thursday’s board meeting, said they will be communicating with the district and demanding a plan be presented to address their concerns.

“In the certified letter, we are going to express again our concerns we had today, but we also want to see a 30-day timeline of improvements,” Cassandra Wooten said. “We are approaching the end of the first nine weeks of school and as we expressed, there has been no virtual learning. Kids are having issues uploading documents on Schoology. There’s not a lot of contact with the teachers, the administrators, with the school board. We want a 30-day action plan.”

Supt. Cory Uselton and school board members did not comment on the parents’ concerns and, after hearing the comments, recessed and went into executive session.