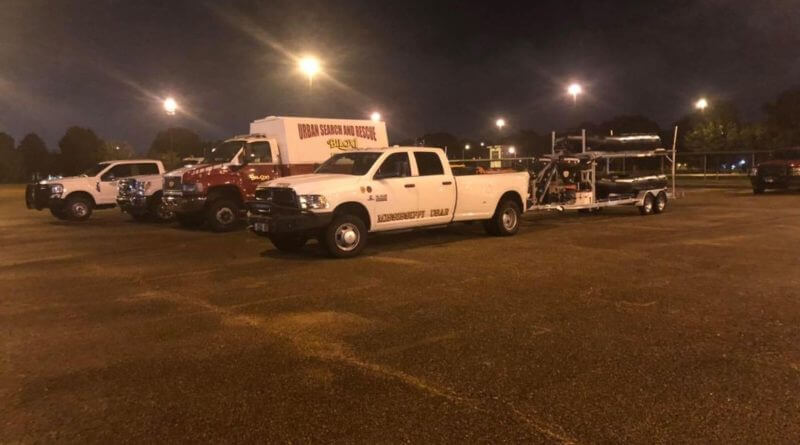 There is some DeSoto County presence in Louisiana responding to what at this writing had become Tropical Storm Laura, a weather system that early Thursday morning struck as a Category 4 Hurricane.

Members of the Mississippi Urban Search and Rescue water rescue team were deployed to Louisiana Wednesday night to help with rescue efforts.  They reached Baton Rouge and spent the night there, awaiting orders to be dispatched and briefed.

Twenty-seven members and eight boats from across Mississippi make up the US&R team.

Entergy spokesman Don Arnold Friday morning said six Entergy employees from the Southaven office went into the area to help out and more may go after local outages from Thursday night’s storms are reconnected.

Northcentral Electric Cooperative spokesman, Michael Bellipanni said, crews were not immediately sent to Louisiana as the Northcentral service area was bracing for its own impacts of Laura.

“Some of our contractors headed south to assist in recovery efforts though,” Bellipanni said.

“We began to get weather-related outage reports around 6:30 p.m. Thursday evening,” Bellipanni said. “Additional personnel were called in to assist our on-call service men around 10 p.m. and worked through mid-morning Friday to restore scattered outages. We were very pleased to see that areas where we concentrated our tree trimming and vegetation management efforts were largely unaffected.”

Laura made landfall about 1 a.m. Thursday morning near Cameron, Louisiana with winds of approximately 150 miles per hour, just short of Category 5 strength.

As of Thursday afternoon, Louisiana Gov. John Bel Edwards had confirmed at least four fatalities from the storm, including a teenager killed when her house was struck by a falling tree.

It’s the strongest hurricane to make a Louisiana landfall since 1856.