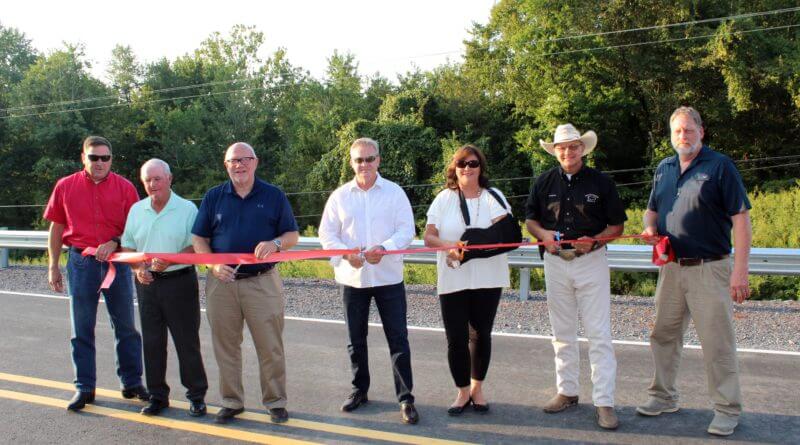 DeSoto County officials held a pair of ribbon cutting ceremonies in western DeSoto County last Thursday for a new bridge on Star Landing Road and the opening of the Johnson Creek Greenway.

The Star Landing Road bridge near Lake Cormorant was officially opened with a ceremony to complete what Supervisor Ray Denison said was about a 6-7 month project. The former bridge had deteriorated to a point it was no longer safe to travel on, Denison said.  He represents western DeSoto County on the Board of Supervisors.

“The bridge that was here was compromised at best,” Denison said. “I think it was rated for a 5,000 pound load and this one is rated for 40,000 pounds. The farm equipment that comes down this road is heavy and this bridge will more than handle the load and keep local traffic on track.”

The former bridge kept school buses from crossing over because of the weight load and had to detour an extra 30 minutes around it due to its condition.

“The county had some drainage pipe that was dilapidated and we found it as we were peeling some of the shoulders back, so we opted to go ahead and spend some money to address that for the long term,” Denison said.

Officials moved from the bridge down Star Landing Road to the Johnson Creek Greenway, where the multi-use trail was opened with a ceremony at its eastern entrance on Baldwin Road, north of Star Landing.

The facility is about two miles in length along Johnson Creek and is open to pedestrians, cyclists, wheelchairs and riding horses.  It came at a cost of about $1.2 million, which was funded in part by the Federal Highway Administration. It was appropriated by the Mississippi Department of Transportation and the Memphis Metropolitan Planning Organization (MPO). It runs along a DeSoto County Regional Utility Authority (DCRUA) easement.

“This is a huge asset and is already getting a lot of attention from walkers and bike riders to wheelchairs and horse riders,” said MDOT Northern District Transportation Commissioner John Caldwell of Nesbit. “Especially during this time of COVID, people are looking for parks to get some fresh air and enjoy nature. Places like this are key for people to get out of their houses, stretch their legs and keep healthy.”

County officials said the trail opening was the first step for larger plans. Supervisors hope to begin phase two next year. Eventually the path will connect with other trails and greenways across the county, leading to connections from the west to as far east as Olive Branch.