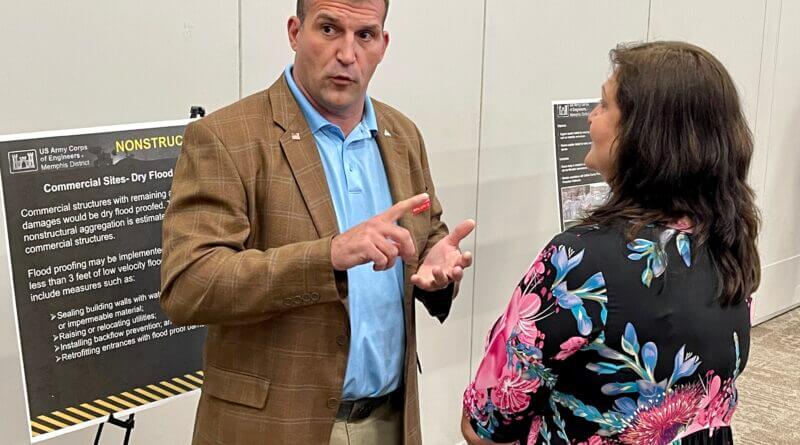 The U.S. Army Corps of Engineers has taken another step toward determining how to control excessive stormwater issues in the Horn Lake Creek, Nonconnah and Coldwater River basins. However, a final result may still be a few years down the road.

A public meeting was held late last week at the Landers Center where public comment was received about the Corps’ preliminary plan to manage the flooding risk in the area, while also addressing ecosystem deterioration.

The flood risk management plan involves an earthen levee that would work its way down from south of Goodman Road and east of Highway 51.

The Corps noted in some of its documentation that major flood damage has occurred in the area on four separate instances in a six-year period between May 2010 and Mach 2016, with three people having died as a result of the flooding.

But the Corps also noted that streams in the area have declined in support of fish and wildlife as residential and commercial development have increased over the years.

The project is currently in the public comment period through June 20 and the public meeting was required for the Corps to present its findings.

“We’re trying to reduce the risk of flooding throughout the county and also increase the ecosystem restoration, just do everything in our authority to make benefits for DeSoto County from a flood risk management and ecosystem restoration perspective,” said project manager Andy Simmerman with the Corps of Engineers. “That area will need additional surveying and more in-depth high-level engineering to see what the total effect of the flood wall will be.”

Simmerman said there were 18 separate alternatives that were considered before coming up with the levee location, although some local officials said later that levee may need to be placed further east because of planned commercial development near the proposed levee.

“We’ve gone through numerous alternatives in the last few years and this is the best solution that we’ve brought to the table today that has a benefit-cost ratio greater than one,” Simmerman said. “It’s something that currently the DeSoto County Board of Supervisors and the public can live with and support going forward. Could there be some subtle differences at the end? Yes. Once we get authority, that is just half the battle. We’ll then have to compete on a national scale for appropriation dollars to construct it.”

The project also has to move “up the chain” of command with the Corps of Engineers before it goes into competition for Congressional funding and approval. Simmerman said the project will end up costing close to $60 million, in today’s dollars.

“The total cost estimate is a rough number,” Simmerman said. “It’s about $19 million for the flood wall and the earthen levee, the flood risk management portion at Bullfrog Corner. It’s about $34 million for ecosystem restoration. Some of that cost is construction and some of that cost is acquiring land and fees that we would need to acquire to build the project. That’s our rough estimate today.”

Some of that funding may be shared by DeSoto County and if the estimates get too high, some priorities may need to be set for the project to at least get started.

The public can learn more about the project by visiting the project’s website. June 20 is the deadline for public comment and the website is where you will learn how to submit comments.