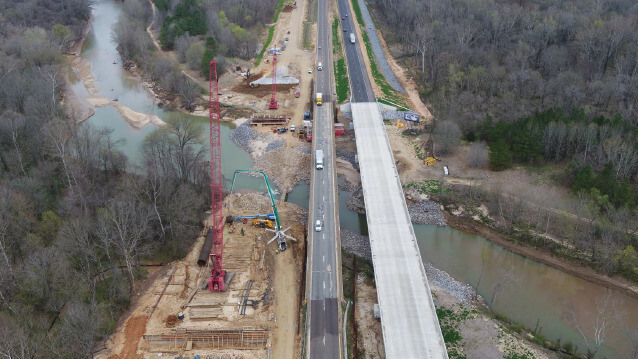 “I’ve been watching the contractor diligently working to stay ahead of schedule and keep traffic flowing,” said Northern District Transportation Commissioner John Caldwell. “I’ve also seen too many vehicles speeding through as if it was not an active construction zone.”

Crews have completed construction of the two bridges in the northbound lanes of I-55 and traffic has been transferred into those lanes. Northbound traffic is set in the new alignment.  Southbound traffic has been transferred onto the old northbound lanes of I-55. Foundation and substructure work is ongoing on the bridge over Hickahala Creek. Placement of steel beams on the bridge will start within 30 days. The contractor has finished pouring the concrete deck of the bridge over Hickahala relief. They are now doing earthwork and grading to bring the roadway up to the elevation of the new bridge.

The project was awarded to W.G. Yates & Son Construction Company of Jackson. This project is set to be completed in the fall of 2022.

One thought on “Bridge replacement work continues in Tate County”