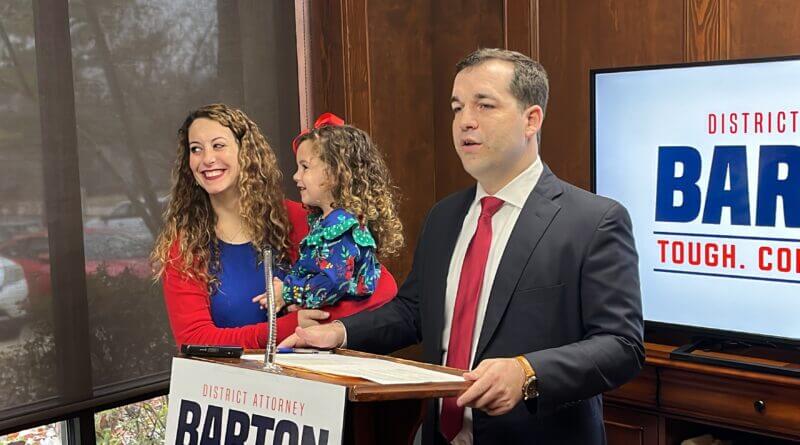 Hernando attorney Matthew Barton announced his candidacy for District Attorney at a Tuesday morning event, saying he wants to bring more efficiency to the office while being tough on crime.

Barton, part of the Little & Barton Law Firm in Hernando, made official his plans to run with his wife Megan and daughter Eleanor at his side before friends and supporters.

Barton will be challenging for the office now held by Robert Morris III, the man appointed by Gov. Tate Reeves after the death of John Champion in early September after a two-year long illness. Morris was an assistant District Attorney under Champion.

The District Attorney’s Office, now part of the five-county 17th Circuit Court District, will become the 23rd Circuit Court District serving DeSoto County only after November 2023. Districts were redrawn by the state Legislature due to the growing population of the county compared to the other counties in the 17th District.

In making the announcement, Barton said the office requires his “tough on crime, conservative values” approach.

Barton was the founder and former managing member of the Barton Law Group, which merged in 2019 to form the Little & Barton Law Firm with attorney Stan Little. The firm website states Barton has prosecuted cases in almost every court in DeSoto County.

Barton took note of crime problems in Memphis and Shelby County and stated, “we’re not going to let that happen to us.”

“I’m going to build a legal wall on our Memphis border,” Barton. “If people come and cross that border and end up in my courtroom, I will personally introduce them to the Mississippi Department of Corrections, where they will stay until MDOC doesn’t want them any more. If they are bad enough, we will stamp ‘no return’ on their back and send them to the penal farm.”

He also noted some DUI laws need to be rewritten. Barton said that misdemeanor DUI offenses are not prosecuted in DeSoto County when attached to a felony charge, for instance.

When reached by email Tuesday afternoon, Morris said he would have a more detailed response coming this week, but stressed that he does plan to run for a full term and would be running as a Republican, setting up what will be a competitive primary in August 2023.

When appointed by Reeves in September it was said then that Morris would be a candidate for the full term, which is four years in length.