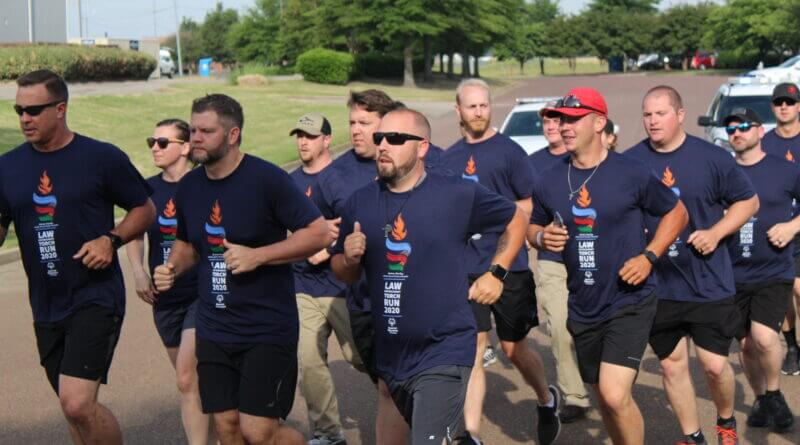 Saturday morning in DeSoto County was a great morning for some outdoor exercise, maybe even an early morning run.

Some of the area’s finest did just that Saturday morning, getting together for a run at Southaven’s Snowden Grove Park and in front of the Strike Zone Bowling Alley. But these law enforcement officers from the county and around the area were running for a cause.

They were part of a Law Enforcement Torch Run for Mississippi Special Olympics. In the spirit of the Olympics, a torch was lit and entrusted with DeSoto County Sheriff’s Department Deputy Antone Curtis.

Then, led by Sheriff Department Lt. Mike Cowan, the group of deputies and police officers from the area ran in cadence time from the bowling alley, around the park, and then finished in front of the bowling alley as an open to a daylong bowling event Special Olympics was doing at the Strike Zone.

The sale of the shirts worn by the officers provided some funds to Special Olympics, but Cowan said supporting the Special Olympics movement was the primary purpose of the event.

The Law Enforcement Torch Run (LETR) is national in scope, having been started in Wichita, Kansas in 1981.  It is the largest grass-roots fundraising movement for Special Olympics.

Since its inception, LETR has raised more than $415 million for the Special Olympics, which said on its website the LETR can be found in 46 countries with more than 85,000 volunteers.

The Special Olympics concept was started by Eunice Kennedy Shriver in 1968 as a means to provide athletic-style opportunities for those with intellectual disabilities.