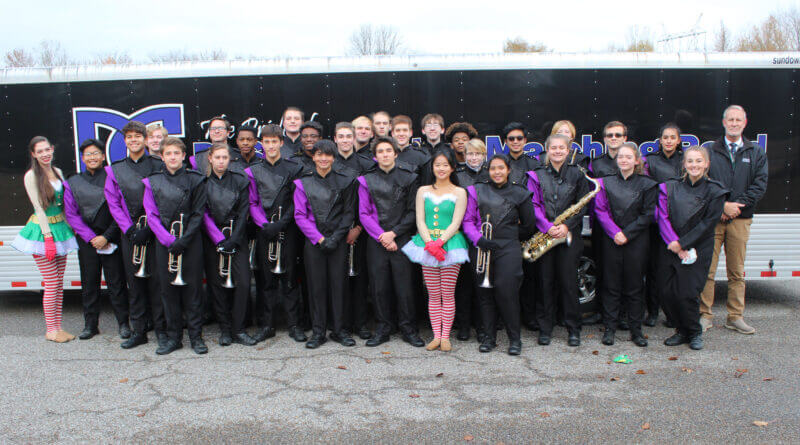 Many times during this time of year high school bands get to show their musical and marching abilities as part of the variety of Christmas parades held across DeSoto County.

However, COVID-19 this year put an end to having bands, floats, riding horses, and Santa Claus come down the street to kick off the Christmas celebration season.

That has kept the award-winning Pride of DeSoto Central marching band from participating in Christmas parades, but Director of Bands Dennis Cox came up with a way to keep his musicians marching.

In the past couple of weeks the 117-member band members have played and marched in front of young school children at three elementary and primary schools in the DeSoto Central attendance zone.

Monday, the band loaded up and took their show back on the road again, playing for the residents of Southaven’s DeSoto Healthcare Center, 7805 Southcrest Parkway.

This year, Cox said he wanted the band to have the normal experiences that have been provided before, even if they don’t travel a long distance and be part of a huge outdoor parade event.

“We’re just trying to make it as normal for the kids as much as possible, but we’re also spreading some Christmas joy,” Cox said.

In Monday’s case, Cox said the band had been requested by the center’s activities director.

“There’s a lady named Mary Bailey who is in charge of activities here and she contacted me about coming earlier in the year,” Cox said. “I asked her about waiting until Christmas and she said yes.”

Residents viewed from inside as the band marched by, but got to watch it through their windows and Cox thought they thoroughly enjoyed the music.

“When you saw them raising up their blinds and waving at us as we marched around, it was worth it 100 percent,” Cox said.

“It gives us a chance to work on our marching skills, so we didn’t ignore them for a year,” Cox said. “We were hoping to do the Southaven parade but that got canceled, so we came up with this idea. If we can’t go to the parade we can bring the parade to the people.”

One thought on “A march for Christmas cheer”