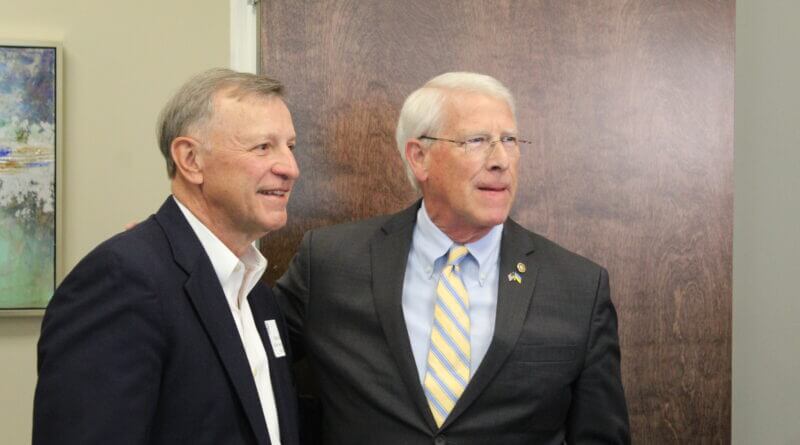 Growth has brought about some good problems to our fast-growing area of Mississippi, where Wicker related, “eight percent of the entire population in Mississippi is here in DeSoto County,” and where he believes the county’s population may hit 200,000, in either, “a matter of months or a few short years.”

One of the concerns in the county has been connecting rural residents to broadband internet, which Wicker believes the importance of which can be compared to rural electrification 100 years ago.

County Supervisor Lee Caldwell quoted about 15,000 residents in the county as not able to access broadband.

That transportation bill, from August of last year, devoted $65 billion to broadband deployment, including a minimum of $100 million for buildout in Mississippi.

Northcentral Electric Cooperative, which helped bring the Senator and local leaders together, remains active in its buildout of broadband to its service area with its subsidiary Northcentral Connect.

Another item the Senator touched on was the DeSoto County Regional Utility Authority, or DCRUA, wastewater treatment system expansion further west toward the Mississippi River.

“We are going to have to expand the DCRUA wastewater treatment system in that direction and continue building it up because of our growth,” Wicker said.

Horn Lake Mayor Allen Latimer brought up the issue between Memphis and DeSoto County with the Horn Lake interceptor sewer system. The dispute has gone into the court system with Memphis telling Horn Lake and Southaven that it plans to cut off the communities from treating its sewage next year, an action that would leave about 70,000 DeSoto County residents without wastewater treatment service.

Building its own sewage treatment facility would cost between $230-$300 million, according to Latimer.

Wicker felt any court action would likely fall on the side of DeSoto County, but he still intimated it might be time for the county to have its own facility and not depend on Memphis.

“We had a deal with Memphis and the deal was always that DeSoto County would be part of it,” Wicker said. “They see it differently and they’re going to take it to court. I think we might win that lawsuit, but let’s just decide that we will be in charge of our own destiny here in Mississippi. That’s the approach we’re going to have.”

On national and international issues, Wicker told DeSoto County News in an interview he was adamant that Ukraine must prevail in its struggle with Russian leader Vladimir Putin and that the United States should provide Ukraine all the assets it needs to fight.

“I think it’s time for Vladimir Putin to be indicted for war crimes,” Wicker said. “Thank goodness the Ukrainian people over the last eight years have decided they want to defend their country. They want to be free and look westward toward democracy and free enterprise and away from a Communist-controlled society that they were under for so many decades when they were part of the Soviet Union.”

Wicker pointed out that Congress authorized $3 billion to Ukraine and President Biden has given them just $900 million of that, so far.

“I say, ‘let’s release the other $2.1 billion that Ukraine needs to win this war.’” said Wicker.

The Mississippi Republican was among the 47 Senators who this week voted against the confirmation of Ketanji Brown Jackson to the U.S. Supreme Court, a vote that went 53-47 in her favor.

Wicker said his opposition comes from a belief she will try to make law from the bench, instead of just interpreting the Constitution and federal laws on the books as written.

“President Biden promised to appoint an activist judge and it turns out that’s exactly what he did,” Wicker said. “It’s no surprise. We’ve just been presented with a pretty left-wing member of the Supreme Court, but at least it doesn’t change the liberal-conservative breakdown.”

Of the nine members of the Supreme Court, six are considered conservative with three liberals.