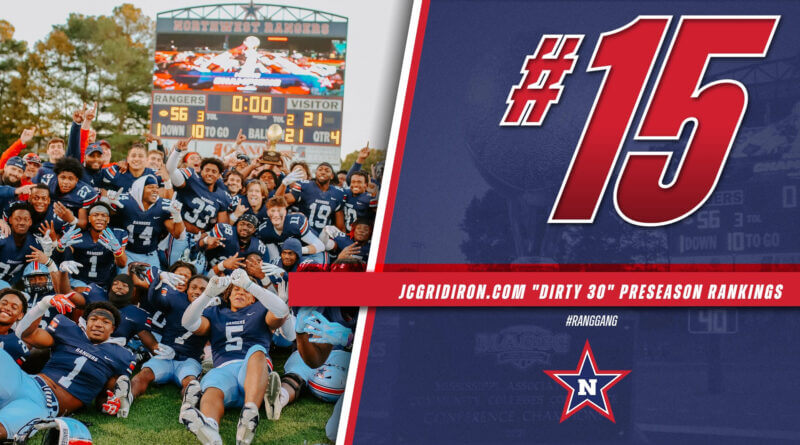 With the start of the 2022 season less than two months away, the first preseason poll has been released and to no one’s surprise, Northwest is included.

JCGridiron.com revealed its preseason rankings on Monday and the Rangers are slotted at No. 15 in the nation. Compiled each season by JCGridiron.com publisher Brad Hoiseth, the Dirty 30 rankings include all NJCAA member institutions, as well as programs from the California Community College Athletic Association.

Hutchinson (Kan.) tops the 30-team poll as the overall No. 1 team, followed by East Mississippi at No. 2. San Francisco, Iowa Western and Lackawanna (Pa.) round out the top five.

Other MACCC teams ranked in the poll include the Rangers’ season-opening opponent, Mississippi Gulf Coast, at No. 11, Jones College at No. 13 and Hinds at No. 19. Holmes, Copiah-Lincoln and Mississippi Delta were not ranked but were listed as “bubble teams”.

Northwest will kickoff the season on Thursday, Sept. 1 against MGCCC at 7 P.M. from Bobby Franklin Field.