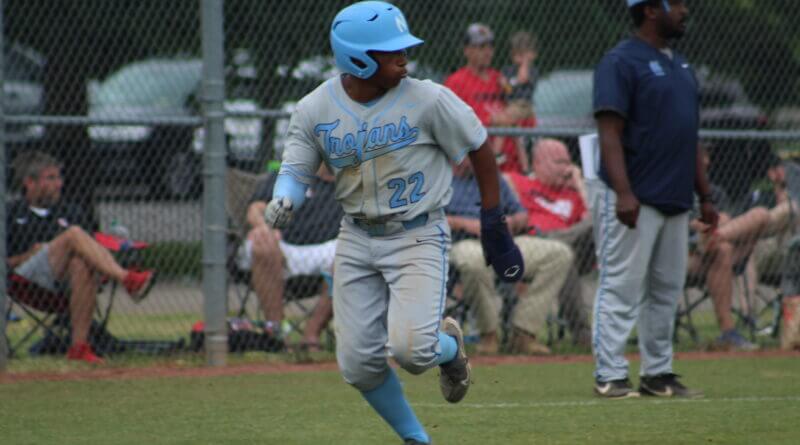 The Northpoint Christian School baseball Trojans, needing to win two games Wednesday to reach the TSSAA Division II-A state championship, fought through an extra-inning game, a rain delay, followed by another delay on the “expectation” of rain that became an actual rain delay, to accomplish that. Their reward is a third state championship appearance Thursday, but the challenge again is to win twice to hoist the trophy.  In all, Northpoint spent more than 12 hours battling on the baseball field to reach the final round.

“There are a lot of reasons to and excuses for not playing our best,” said Northpoint coach Stephen Kirkpatrick. “They didn’t take those excuses and use those excuses. We came out on top.”

Following are recaps on the two games Northpoint played Wednesday: an 8-7 extra-inning victory over Silverdale Baptist Academy, followed by a 12-5 victory over Grace Christian Academy-Franklin.

NORTHPOINT CHRISTIAN 8, SILVERDALE 7 (8 innings): The first game of the day started at 10 a.m. and including rain delays finally finished after 2 p.m. Wednesday when Spencer Haley’s walkoff single scored James Smith and kept the Northpoint Trojans alive in the tournament.

Northpoint needed a big inning to put themselves in position to win however by posting a five-run fourth inning to take a 7-4 lead. The Seahawks answered with a two-run fifth and another run in the seventh to send the game into extra innings.

Haley was most productive offensively at the plate with three RBIs in his two hits for the game, including the game-winning walk off base hit.  Connor McKnatt added a pair of RBIs for the Trojans. James Smith had three hits, which included a double, and Jay Ferguson also doubled for Northpoint.

KL Farr was the winning pitcher in relief for the Trojans, pitching three innings and allowing two earned runs. Smith started the game on the mound and gave up four runs while striking out five and walking two. Connor McKnatt threw two innings, allowed one run and struck out one.

NORTHPOINT CHRISTIAN 12, GRACE CHRISTIAN 5: The late game, which became the “really late” game, started shortly after Grace Christian lost to Goodpasture Christian 9-3 in the winner’s bracket contest. The game was called after four innings with a stoppage and the tarp being put on with the “expectation” of rain coming. The tarp stayed on for about 20-30 minutes without a drop of rain, enough time to finish another inning of play. But the heavens did finally open up and fans scattered as the delay became an actual rain delay.

When the game was called, Northpoint had just scored four runs for a 7-3 lead on the Lions and appeared on the verge of breaking the game wide open. The early stoppage seemed to rile the Trojans to the point where when play resumed, Northpoint did break the game open with five more runs in the fifth for a 12-4 advantage.  Grace Christian scored one more in the sixth but nothing further after that.

It all didn’t seem to phase Northpoint pitcher JB Williams, who through it all allowed five hits and struck out 11 and came one pitch short of having to leave the game on pitch count limitations.

“He’s risen to the occasion,” Kirkpatrick said. “He hit phenomenal tonight and stepped up to the plate literally and figuratively tonight. He was better after the (rain) break than before. He was just relentless.”

“I always try to keep calm,” Williams said. “I know it’s a big game but you always gotta stay in the moment. You gotta make big pitches when it matters. I felt like I did that tonight.”

Haley and McKnatt continued to have the biggest impact on the offensive side of the lineup, each with four RBIs for the Trojans. McKnatt blasted a two-run homer in the third inning among his two hits and four RBIs. Haley manufactured his four runs driven in on three singles.

Ferguson doubled again for the Trojans, as did Williams in support of his performance on the mound.

“Connor’s been doing it all year and Spencer came up with so many big hits today,” Kirkpatrick said. “Spencer’s fought through a lot of adversity this year with injuries and he’s been such a key cog to our offense this year.”

But it was on the mound where Williams was especially impactful, getting the Trojans back to the championship game after pitching in the West Region finals against ECS. He struck out the side in the seventh with this last pitch to win the game.

The Wednesday win also avenged the Trojans’ 6-2 loss to Grace Christian that opened the tournament on Tuesday.

NORTHPOINT VS. GOODPASTURE THURSDAY: The championship round starts at 1 p.m. Thursday with Northpoint taking on a Cougars’ team that has won both games they’ve played in.

Goodpasture (40-4) hammered Silverdale 18-1 in a five-inning shortened game Tuesday and Wednesday slotted into the finals with a 9-3 victory over Grace Christian. The first game will begin at 1 p.m. and will be streamed on the NFHS Network.

Since Northpoint (29-10) has one loss and Goodpasture is unbeaten, the Trojans will need to win twice Thursday to win the championship.

“Goodpasture is hitting really well, so we should have an offensive-type day,” Kirkpatrick said. “We’re going to give everything we can to them. We’re going to come ready.”

This is the third appearance, and second straight time for the Trojans in the state championship. The SBEC Trojans defeated Tipton-Rosemark 17-5 to win the 2009 championship, but lost as Northpoint last year in a 12-11 slugfest to Christ Presbyterian Academy.