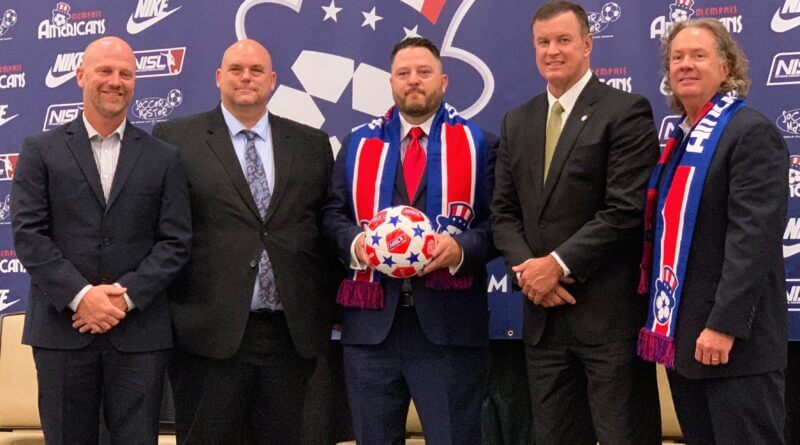 At one time, Memphis had a professional indoor soccer team playing at the old Mid-South Coliseum in the Memphis Americans of the Major Indoor Soccer League.

Kyle Rote, Jr. was among those who bought the Hartford Hellions in 1981 and moved the team to Memphis.

The team was in Memphis for three seasons before moving to Las Vegas. Rote coached the team for one season after Horst Bertl, the team’s first coach. Steve Doerr was among the players the franchise attracted.

Rote apparently liked it so much in the Mid-South that he chose to stay when the franchise moved to Las Vegas. He still lives in Memphis, is a sports agent, and represents professional and post-collegiate athletes through his company, Athletic Resource Management, Inc.

Thursday, area soccer fans learned they were about to get not one, but two new professional indoor soccer teams, men’s and women’s, in the return of the Memphis Americans. Only this time, the Landers Center in Southaven will be the home arena for the first announced franchise in the newly-formed National Indoor Soccer League (NISL).

“This is the first announced team,” said Andrew Haines of the ownership group. “We have committed to four cities. As a league, we’ll have more success if we’re smaller in the right markets with the right partners, and then we’ll grow from there.”

Haines said the league will initially focus on the southeast United States with the goal of going national within three years.

Haines, president of a sports and entertainment marketing and consulting company, felt the team needed to embrace the history of indoor soccer in the Mid-South in reclaiming the Americans name.

“Back then, indoor soccer was the top thing and you had some world-class athletes playing indoors,” Haines said.

In an effort to also promote women’s soccer, each NISL franchise will field both men’s and women’s teams and each game date will have a women’s game and a men’s game.

Joshua Blair, representing the NISL, said some history will be made in pro soccer with the new league.

“We realized we had an opportunity to do something no other league in history has done,” Blair said. “The NISL is the first professional league to have both a men’s and a women’s division. The NISL is the only league that has women’s professional indoor soccer.”

Blair said a single ticket will get you into both games, which will be played back-to-back the same night. The season of 24 games will have 12 home dates and will run from December to April.

That will run concurrently with the normal NBA G League season of the Memphis Hustle and expectations are that the Hustle will return to a normal schedule this coming season, after playing the 2021 season in a bubble in Orlando, Florida.

Haines compares the level of play with the Americans will resemble the United Soccer League, or USL, a Division II professional outdoor soccer league.

A coach has not been determined and the timetable is open about finding one.

“We definitely have some interest but we’ve got to get the right person,” Haines said. “I’ve already heard from at least a dozen candidates in the last 48 hours because they see what’s coming.”

Haines added he hoped the team would have as many regional players as possible.

The timing of the announcement was a favorable coincidence for Southaven, which just last weekend opened its new Soccer Complex at Snowden Grove Park, said Musselwhite, adding this will provide more “fun” things to do in the city.

“This will tie in real nicely with that (soccer complex),” Musselwhite said.

Season tickets will start at $120 for the 12 home dates that will all be doubleheaders of women’s and men’s games.

Haines believes the team can attract at least in the neighborhood of 4,000 fans a game, similar to another indoor soccer team he owned in the St. Louis, Missouri area.

“It’s going to be an unbelievable atmosphere here,” Haines said.