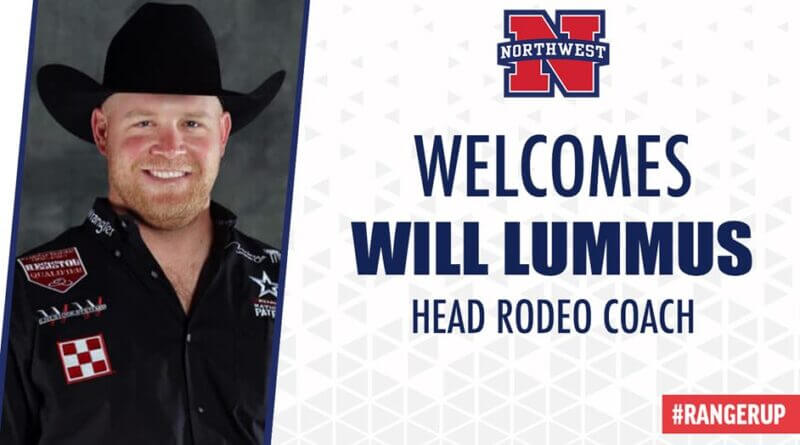 A professional rodeo star is now the latest addition to the Northwest Mississippi Community College family.

International steer wrestler Will Lummus has been selected to lead the Rangers’ rodeo program, the college announced on Monday morning. Lummus joins Northwest with a strong professional resume, highlighted by an average title in the 2021 Wrangler National Finals Rodeo and a No. 2 world ranking in steer wrestling.

“I am excited to join Northwest,” Lummus said. “I enjoy helping and developing the younger generation of rodeo athletes and I feel that I can be the coach that Northwest needs to not only get back on the winning side of competition, but to also have confident and successful adults once they leave.”

Lummus has competed around the world since joining the professional rodeo circuits in 2012, but his international status began to really take shape in 2016, when he won his first two steer wrestling events in West Monroe, La. and Dade City, Fla. The next year, he soared from 163rd to 20th in the world standings after winning the Northwest Florida Championship Rodeo, the Lowry’s 4L Ranch Rodeo (Summerville, Ga.), the Heart of the North Rodeo (Spooner, Wisc.) and the Cassia County Fair & Rodeo (Burley, Idaho).

In 2018, Lummus continued his meteoric rise by placing in seven rounds of his Wrangler National Finals Rodeo debut, including a round five victory. He finished third in the Wrangler NFR average standings and third in the world standings, winning nine major rodeo events in California, Colorado, Florida, Idaho, Texas, Washington and Montana.

In 2020, Lummus finally cracked the top 10 in the worldwide standings, earning a fifth place finish and qualifying once more for the Wrangler National Finals, winning Round Three and splitting the win in Round 10. He placed in three other rounds, finishing fourth in the NFR average with 52.3 seconds on 10 head. Additionally, Lummus also won seven other events, including the Rodeo of the Mid-South in Southaven and the Southern Miss Coca-Cola Rodeo in Hattiesburg.

Last year brought a few career milestones for Lummus, as he finished second in the world standings and made his fourth appearance at the Wrangler National Finals. It was at the NFR where he won the average for the first time in his career, notching a time of 43.0 second on 10 head. Lummus also placed in six rounds, winning Round Eight and splitting the Round Four victory, while also adding seven more rodeo wins to his resume.

Lummus has continued to tear up the professional circuit this year, earning four victories. His most notable win came last month at the world-famous Calgary Stampede in Alberta, Canada, where he turfed his steer in a speedy 3.6 seconds during a four-man championship round.

“We are thrilled to welcome Will Lummus into our Northwest family,” said Northwest President Dr. Michael J. Heindl. “His tremendous success in rodeo will carry forward to our student-athletes and we could not have asked for a better leader at this important time.”

Prior to his emergence in the professional ranks, Lummus competed collegiately at East Mississippi from 2010-12 and UT Martin from 2012-14. His college career came with several honors as well, most notably helping UT Martin to a College National Finals Rodeo title in 2014. He also won three individual championships for steer wrestling and calf roping.

Before college, Lummus qualified for the National Finals High School Rodeo in steer wrestling and tie-down roping, while also qualifying for the 2009 National Little Britches Rodeo Association in tie-down roping.

Lummus holds an Associate of Arts in fine arts from EMCC, a Bachelor of Science in Health & Human Performance from UT Martin and a physical therapy assistant licensure from Wallace State Community College. He currently lives in Byhalia with his wife, Jenna.

Northwest is slated to begin its 2022-23 Ozark Region campaign in late September at the Viking Stampede, hosted by Missouri Valley College.