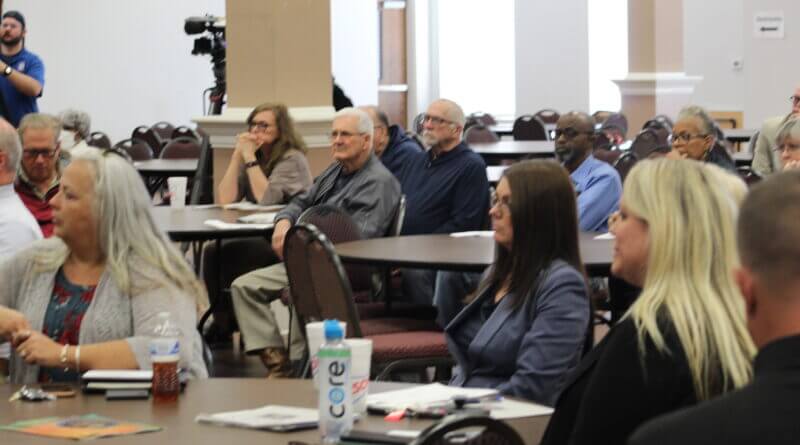 The prevalence of illegal drugs and the growing threat of gangs and gang violence were two themes of a Community Summit held Thursday at Longview Heights Baptist Church in Olive Branch.

Capt. Scott Evans with the Horn Lake Police Department said drug addicts are always “chasing the dragon,” as he called it, always chasing that next “high.”

“They keep putting more, injecting more, and snorting more and they may OD (overdose), ” Evans said, adding the move from heroin or fentanyl today is spurred from drugs coming from Mexico.

“China actually started supplying it but they’re selling the precursors to Mexico,” Evans said. “Mexico is making the pills in a powder form and it’s pouring over the border. It’s out there and people are dying from it.”

“That number is 50.72 percent higher than the national average,” Evans said.  “Right now, overdose deaths are right there with diabetes deaths and have exceeded homicide deaths. It’s getting worse by the day.”

Youth Court Judge Craig Treadway discussed some of the cases his court sees, and drug cases are right there.

“There’s a lot of drug offenses that are armed and we take that extremely seriously, as I know does law enforcement,” Treadway said.

Lt. Mike Cowan of the DeSoto County Sheriff’s Department reminded those attending there is a “Good Samaritan Law” in Mississippi

“If you are with somebody and they overdose and you call us to help, we are not taking you to jail,” Cowan said.

Cowan said deputies are equipped with Narcan, an opioid overdose treatment. He also said there is a product called Deterra, which he said can neutralize prescription drugs from being used to make opioids.

“If you have a prescription medication that you are no longer using, we want you to get rid of it. Deterra packages are very easy to use. You dump a certain number of pills in there, you fill it with water, and shake it up, and then you throw it away. It’s safe, this prevents the contamination of the groundwater.”

Cowan said Deterra packages are available at the Sheriff’s Headquarters in Hernando at no charge.

She added parents need to be very aware of a child’s social media traffic.

“Social media is the devil,” Huck said. “It is very easy for predators to manipulate your child. It’s a real problem.

Delvin Lane is the founder of the 901 BLOC Squad and said the Mid-South is a main corridor for gang activity, either coming from the West Coast or the Midwest area.

“The gangs are here,” Lane said. “In order to know what’s going on, get nosy. If you want to protect DeSoto County, play your role, play your part. Figure out how to protect these gangs with a thing called love.”

Capt. Alex Fennell with Investigative Services at the Southaven Police Department said auto burglaries and commercial burglaries are trending in the area at this time. Fennell cautioned about leaving valuables in vehicles, especially in parking lots where distribution centers and athletic clubs are located.

“Take your valuables inside or anything of any importance,” Fennell said.

“We really have to come together as a community to make an impact against domestic violence, “Cox said.