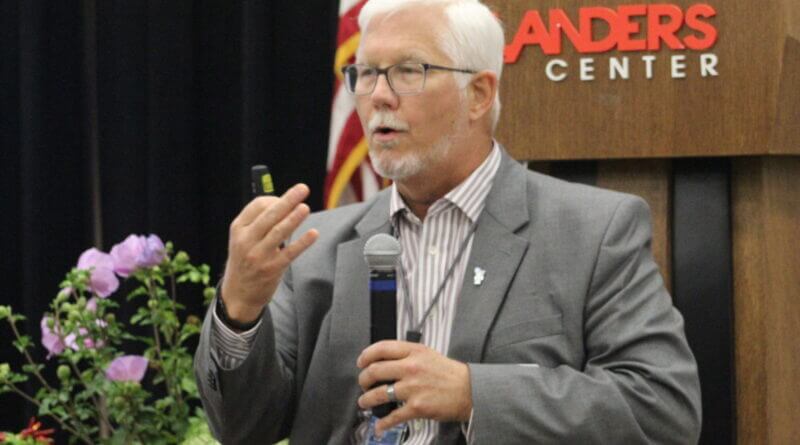 The head of the Memphis International Airport Authority detailed improvements and the impact the airport has for the Mid-South during the Southaven Chamber of Commerce quarterly luncheon on Wednesday at the Landers Center.

Scott Brockman is the President and CEO of the Memphis-Shelby County Airport Authority, overseeing a facility that sees over two million passengers come through the airport annually, and as the FedEx Superhub, sees about 10.1 billion pounds of cargo transported.

However, as Brockman pointed out, as the country drew near the pandemic year of 2020, cargo traffic dwindled.

“Air cargo, pre-pandemic in 2019, was the worst year for cargo globally in the history of records,” stated Brockman. “After the pandemic started, we’ve been about 5-12 percent above the average. Cargo, while it’s not glamorous, generates $18 billion of the $19 billion that we generate in economic impact at Memphis International. It’s really an important part of our business.”

The increase in cargo usage as people were forced to isolate or shelter in place was likely due to shipping increases due to retail purchases needing to be shipped.

Memphis is now back to being the number one cargo airport in the world, followed by Hong Kong.

A major part of what is going on at Memphis International Airport right now revolves around terminal renovation, which is continuing at the facility.

The plan is to consolidate airline, retail and food and beverage operations in the B Concourse. Moving walkways, a wider concourse and larger boarding areas are part of the renovation plans. At the same time, the south ends of the A and C concourses are being removed to allow for unobstructed access by aircraft to the B Concourse. A and C concourse gates are being retained, however, to allow for future growth.

Amenities being built into the renovation are a children’s play area, a stage for live shows in the rotunda area, additional lounge areas and added mobile device charging areas.

In the midst of the renovation, seismic upgrades to the B concourse are also being accomplished.

The modernization project is scheduled to be finished in the fall of this year and the end of the C concourse will be removed in 2022.

Since Delta stopped using Memphis as a hub for its passenger traffic in 2013, other airlines have entered the market and provided competition to help keep fares low.  The different airlines now almost equally share in the customer traffic that uses the airport.

“It gets us fare discipline,” Brockman said. “It provides the competition to keep fares more moderate. People want to travel, especially after being cooped up and they want to travel on a ticket that is reasonably priced to their destination.”

One area slow on the return, however, due to the pandemic, remains international travel, but it is slowly starting to come back, Brockman said.

“Things have started to open up, airlines are running what they call ‘vaccination flights,’” Brockman said. “If you’re not vaccinated, you’re not getting a ticket. It’s still a very limited international opportunity.”

These routes were suspended during the COVID-19 pandemic, but travel demands have increased, not just to the northeast, but elsewhere.

For the month of July 2021, the Transportation Security Administration (TSA) at Memphis International screened a total of 212,509 passengers and employees, making it the busiest month since December 2019. Memphis International has recovered at about a 10 percent faster rate than the U.S. average, according to TSA checkpoint statistics.

Brockman encouraged travelers to check out the Memphis International Airport website for more information about the facility.